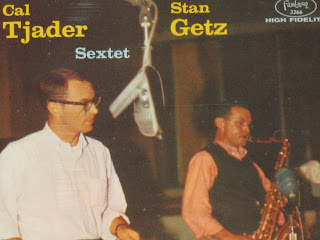 This wonderful album was recorded on February 8, 1958, and is now being re-issued through Concord Music Group as part of its Original Jazz Classics Remasters series.

The album opens with "Ginza Samba," a tune written by Vince Guaraldi, the man famous for composing that great theme for the Peanuts cartoons. This song is just pure fun - mostly because of Cal Tjader on vibes. And where he leaves off, Stan Getz picks up on tenor sax. It just flows so naturally, so perfectly - as if it couldn't possibly have gone any other way. And that's why there are no bonus tracks included on this release. There are no other takes. The songs couldn't possibly go any other way.

And when Stan Getz pauses, Vince Guaraldi takes over on piano, and shows yet once again that he is among the best jazz pianists ever. Then Eddie Duran comes in on guitar, making it sound effortless, like talking, like breathing, pulling all these notes out of the ether, and putting them in exactly the right order. Because, you know, sometimes things go just exactly right. This album is evidence of that.

"For All We Know"
"For All We Know" has a mellow, bluesy feel, but still retains a fun quality. These musicians are clearly having a good time. And that means a good time for anyone listening to this album. And in these uncertain and baffling times, it's great to have some things you can rely on. Some things you can count on. I'm not sure that jazz can fight nuclear radiation, but it seems that if anything can, jazz has a good shot at it.

"For All We Know" was written by J. Fred Coots and Sam M. Lewis.

"Crow's Nest" was written by Cal Tjader. I love Vince Guaraldi's work on this one. At times, he has something of an early rock feel in his playing. Eddie Duran seems to take his cue from Guaraldi and adds a bit of a swing to his guitar part. What a great groove. And that leads to an excellent bass solo by Scott LaFaro.

"Liz-Anne"
"Liz-Anne," also written by Cal Tjader, is a fun and catchy tune - a swinging waltz. Groovy, yet sweet. This is a highlight on an album that is as near to perfection as any album can get. This song may very well solve the world's problems - or at least make us feel a bit better about them. If you're late to work and in danger of getting canned, play this track for your boss. I bet you'll keep your job. Why not? This album strengthens my faith in the power of music.

The album concludes with "My Buddy," a tune written by Gus Kahn and Walter Donaldson. It begins with a cool rhythm on bass and drums, with vibes over it. Stan Getz's lead on sax has a certain swinging rhythm to it as well. It feels like happiness, an easy happiness - not trying to do too much or go too far - but really enjoying where it is, enjoying the moment. And isn't that the purest kind of happiness?

So who are these amazing musicians? There is Stan Getz on tenor saxophone. Cal Tjader is on vibes. He at one time played drums for Dave Brubeck. You can hear him on last year's release, The Definitive Dave Brubeck. He also wrote three of this album's tracks. Vince Guaraldi is on piano. Check out Vince Guaraldi's Jazz Impressions Of Black Orpheus, also released through Concord Music Group. Eddie Duran is on guitar. Scott LaFaro is on bass. Listen to Scott Lafaro on Bill Evans Trio's Waltz For Debby, re-issued last year by Concord Music Group. And Billy Higgins is on drums. Billy Higgins will be familiar to fans of Ornette Coleman.


Sextet is being released on March 15, 2011 by Concord Music Group as part of its Original Jazz Classics Remasters series. In addition to Sextet, three other titles will be released that day: Thelonious Monk Septet: Monk's Music; Ella Fitzgerald and Oscar Peterson: Ella And Oscar; and Art Blakey's Jazz Messengers: Ugetsu.
Posted by Michael Doherty at 2:14 PM