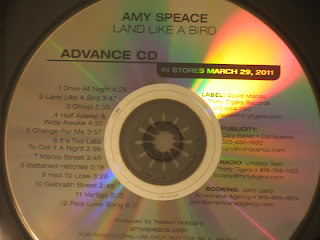 Amy Speace is like a voice coming out of the darkness, or calling into your own darkness. From the first moments of the opening track, she presents herself as a friendly voice in the void. This album feels like night - and not simply because many of these songs take place at night. Night has a timeless quality, where we don't feel time passing as acutely as we do during the day. It's often like things are on hold. And Amy's music has that sense to it as well - that time has stopped while you listen to this album. So listen to this album over and over, and never age.

Amy Speace is an excellent songwriter, as many have attested to before (including Judy Collins, who signed her to Wildflower Records). But she also has a wonderful voice. It's a pleasure to listen to her sing. Put this album on at night. Listen by candlelight, especially to a song like "Ghost."

And is that a reference to the vampire novel, Let The Right One In? The song also mentions From Dusk Till Dawn. And toward the end of the song, she laments, "I miss the sunlight on my skin."

"Drive All Night" was written by Amy Speace and Neilson Hubbard.

The title track eases itself into your head with a moody atmospheric intro. After a minute, the lyrics begin, "Not much sleep/Not much to see/In these bricks and mortar/Tearing them down/Like the walls of your dreams/Flying circles in a dark sky/Trying to soar when your wings are broken." Her voice flies and soars, even while bringing that damaged element into her intonation. The song then builds to beautiful heights, before bringing us all down again right at the end: "Don't say a word/Just land like a bird."

Kim Richey sings backing vocals on this track. "Land Like A Bird" was written by Amy Speace and Neilson Hubbard.

"Ghost" is a beautiful and moving and sad song. Simple guitar, great lyrics. this is one of the best tracks on the album. It's a perfect song for these winter nights that go on so long and with a heaviness that won't seem to lift, giving time to reflect on the people in our lives. Amy's sad song will lift your own dampened spirits. It's the sweet and honest tone of her voice.

She sings, "She didn't change the sheets or make the bed/Just put her cheek where he once lay/She curled up in the hollow where his skin left a faint trace of minten leaf/Where the cotton held him captive/And where she'd watched him sleep/Some people move through our lives/And then they're gone like the morning rain." The song also has great lines like,"This time would be different/He swore it with the rapture of a baptised man/His words undressed her loneliness/With a gospel built on sand." The song has some interesting changes three and a half minutes in.

Amy Speace really understands the power of the masterfully placed repeated line. She makes great use of that power in this "Change For Me" (as well as in "Drive All Night"). Amy sings, "No one wins when someone has to lose/Is it gonna be me?/Is it gonna be you?/Can you hear me now?" The line "Can you hear me now?" is then repeated, and with each repetition it grows in strength. It's a wonderful moment on this album full of great songs.

From that, the song then ends quietly with her softly repeating the question, "When you ever gonna change for me?" It's this amazing change from power to weakness, like getting your attention, and then pleading for what you need.

"It's Too Late To Call It A Night"

"It's Too Late To Call It A Night" has a wonderful slow country feel. Another late-night song, in this one Amy sings, "Is it just me and you/When did everyone leave/Look at us/Like we knew how good this could be." Losing track of the time is something love can make you do. It's also what great music can do to you. Amy's voice is like a lover's whispered entreaty - one that cannot be denied. So stay and finish the wine, and enjoy this song.

"It's Too Late To Call It A Night" was written by Amy Speace and Jonathan Byrd.

"Manila Street" is a pretty song that reminds me a bit of some of the best of Nanci Griffith's work. On tour, Amy Speace has shared the stage with Nanci Griffith. In this song, Amy sings, "I wish for things I cannot ask of you to say/I count the days from then to this/From when you woke me with a kiss/To the day when I won't miss you like I do today." Her voice is heartbreaking on lines like, "How will I know when I'm over you/When tears give way to something new/And maybe then I'll love again." Gorgeous.

"Battened Hatches" might have the happiest feel of the songs in this collection. The guitar and Amy's vocals have bright tones, and the song actually begins with laughter. The lyrics also reflect that optimism: "We'll sail on through this storm/Come what may/We've got all we need/No reason to be afraid."

"Vertigo" begins with a steady driving drum beat, which perfectly underscores Amy's vocal line - itself very rhythmic. This song also has a wonderful build - it captures your heart and pulls you along in its strong current. Amy sings, "The very first time/Your skin against mine/You hold my hand so tightly/Then I fall into you while you fall into me/Every second there's more than I can see/So don't let me go/In this vertigo."

The album concludes with "Real Love Song," another wonderful late-night tune. It's sweet and pretty, with the lyrics offered simply and quietly: "This is our glory/This is our story/This is a real love song." I love the line, "A king, a clown both wear a crown." What a gorgeous and moving way to end the album. If the sun hasn't yet risen when this song finishes, then let the album play again.

Land Like A Bird was produced by Neilson Hubbard, who also plays bass, keyboards and vibes.

Other musicians on this album include Kris Donegan on guitars, lap steel, ukulele and vocals; Evan Hutchings on drums and percussion; Dan Mitchell on organs, keyboards, horns; and Eamon McLoughlin on strings; David Henry on cello.

Land Like A Bird is scheduled to be released March 29, 2011 through Thirty Tigers Records. Amy Speace has released other albums including Songs For Bright Street (2006) and The Killer In Me (2009).
Posted by Michael Doherty at 4:40 PM