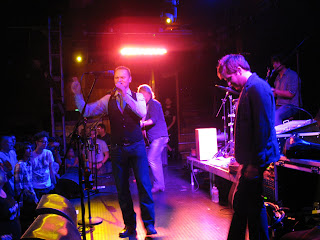 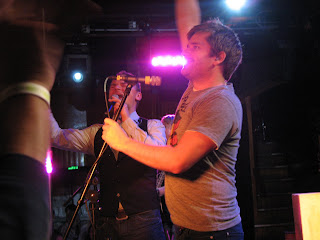 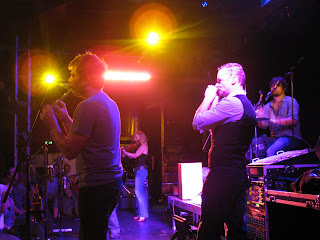 Gaelic Storm put on a phenomenal show at The Troubadour in Los Angeles on Saturday, October 16, 2010.

Gaelic Storm has been performing for nearly fifteen years. They're known for putting on excellent shows, full of energy, joy and great Irish music. Of course, they've had several personnel changes over the years. In fact, only two of the original members remain in the band - Patrick Murphy on lead vocals, accordion, spoons, and bodhran; and Steve Twigger on vocals, guitar, and bodhran. With them are Jessie Burns on fiddle and vocals, Ryan Lacey on percussion and vocals, and Pete Purvis on bagpipes, pipes, whistle and vocals.

After all these years, Gaelic Storm still puts on a phenomenal show. Though there were no drinking contests between band members and audience members as in the old days, the band still had a great rapport with the crowd. The connection was immediate and strong. Partly it's that these folks just seem so real, so true, and so friendly. Partly, it's their sense of humor - the way they joke among themselves and with the audience. But mostly it's the music, which invites an intimacy with the audience.

Gaelic Storm took the stage at 9:20 p.m. Saturday night. They opened the first set with "Leaving Of Liverpool," a traditional tune that pulled the audience in immediately. Patrick Murphy got the crowd clapping along with the chorus toward the end of the song.

From there, the band went straight into "Hills Of Connemara." During this song were the first solos of the night, including a brief drum solo.

The band kept up the energy with "Johnny Jump Up," during which Patrick took out his spoons for the first time of the show.

Patrick introduced "Born To Be A Bachelor" by saying, "Here's a sexy song." Pete Purvis played bagpipes on this one. Steve Twigger did a short guitar solo, then Jessie took a turn at lead on fiddle. Patrick played harmonica. After that song Patrick said he recognized half the audience.

That's not surprising, as Gaelic Storm got its start as the house band at O'Brien's in Santa Monica, not all that far from The Troubadour. They used to play at O'Brien's every week, putting on incredibly fun (and long) shows.

Gaelic Storm then did the first instrumental tune of the night, titled "The Samurai Set." This song featured a sort of duel between Jessie on fiddle and Pete on bagpipes. Jessie took a solo, then Pete literally kicked her out of the way (though playfully, of course) so he could do his solo. They went back and forth, until the end when they both stepped out onto the lip of the stage and played together. It was a wonderful moment in a show full of wonderful moments.

"Me And The Moon"
Steve Twigger asked the audience, "Who has never seen Gaelic Storm before?" Approximately half the audience members raised their hands. Steve then divided the audience for the next song - those on his left would shout, "I brought the whiskey," while those on his right would shout, "We brought the light." Light refers to moonshine, he informed the crowd. Whichever side was louder would get a prize: "If you win, you take the piper home with you."

Steve sang lead on this one. Shots of whiskey were distributed on stage, but only to the band members on the left side of the stage (the side that brought the whiskey).

After that song, an audience member shouted out a request for "Johnny Tarr." Patrick replied that he'd do it for a hundred bucks. The band then went into "Beggarman," which featured a nice fiddle solo. (During the second set, they would fulfill the guy's request and play "Johnny Tarr.")

"Drink The Night Away"

Steve introduced "Drink The Night Away" by saying, "This is a drinking song," which got both a cheer and a laugh from the audience. "Drink The Night Away" is the opening track off of the band's 1999 release, Herding Cats. The line "Raise a glass" stopped the song, as audience members and band members alike raised their glasses.

That led Steve to ask, "Where are the O'Brien's people?" He was referring to the folks who used to attend the weekly Gaelic Storm concerts at O'Brien's. Several people in the audience shouted back at him.

After that song, a man came on stage and replaced Patrick's Guinness. (All band members had drink holders on their microphone stands.) Patrick joked, "Other bands have guitar techs. We have Guinness techs."

"Raised On Black And Tans"

The band ended the first set with "Raised On Black And Tans," the first track on their 2010 release, Cabbage. At the end of the song, most of the band left the stage except Steve and Pat, the only two original members. But those two stayed only long enough to mention their merchandise table and to say they're taking a break.

The first set was just over an hour. After a fifteen minute break, the band returned for the second set, opening it with an instrumental tune.

From there they went into a cover of Simon & Garfunkel's "Cecilia," a song the band also covered on their newest album.

"The Night I Punched Russell Crowe"

Patrick introduced "The Night I Punched Russell Crowe" by telling the story behind the song. He was working at O'Brien's, and Russell Crowe was there, smoking. Smoking is not allowed inside bars in California, and Patrick told him so. Patrick then imitated Russell Crowe's not-quite-intelligible-at-times speech. And then, as the story goes, he was forced to kick him out.

Russell Crowe was apparently not happy about that. As Patrick tells it, Russell Crowe said, "I'll give you first shot. I dare you: hit me." Patrick then laughed, "You never say that to an Irishman." And so he hit him. Patrick continued the story, "He looks at his bodyguard, and says, 'Get him.'" So, of course, Patrick ran.

The story got a lot of laughs, but the song got more. It's a wonderful and silly song. The chorus is, "The closest I've come to ending up dead/Was the night that I punched Russell Crowe/'The Gladiator,' in the head."

They said they had a better time the previous night in San Francisco, and even a better time in Sacramento. And so if the audience was acting bored, the band might as well take a nap. And so, while continuing to play, the band members all lay down on the stage.

After a few moments of that they got back up again, with renewed energy, and continued the song. It was during "Courtin' In The Kitchen" that they also did band introductions.

After only a minute off stage, Gaelic Storm returned for a three-song encore. The first of the three songs, "Floating In The Flambeau," included an excellent section where Patrick, Steve and Ryan all played percussion, while the other two members took a break.

That led into "What's The Rumpus," the title track from the band's 2008 release. And the show ended with a wild version of "I'll Tell Me Ma."

The show ended exactly at midnight.

The Troubadour is located at 9081 Santa Monica Blvd. in West Hollywood, California.