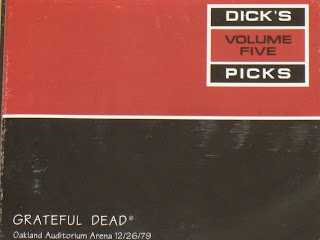 This three-disc CD contains the entire concert the Grateful Dead performed on 12/26/79 in Oakland, California.

The year 1979 was an interesting one for the Grateful Dead. That year saw the final performances of keyboardist Keith Godchaux and singer Donna Jean Godchaux with the band, as well as Brent Mydland's first show on keyboards. That year was also the first year since 1967 that the band did not release an album.

This CD is the entire concert the Grateful Dead performed at the Oakland Auditorium Arena on December 26, 1979. This was the first show of a five-night run at that venue, which would end on December 31st, the band's annual New Year's show.

There is also a nice slow "Friend Of The Devil," with a good, relaxed jam. It's very pretty and sweet, and Jerry Garcia's guitar is singing at times. "Looks Like Rain" is sweet (as usual), but this version has an energetic finish.

The first CD ends with lively versions of "Alabama Getaway" and Chuck Berry's "Promised Land." The band actually did three Chuck Berry songs that night, the other two coming at the end of the second set.

The second disc is what really makes this CD worth owning. It starts with a nice version of "Uncle John's Band." At times this version is sweet and easy-going, like during the verse that starts, "I live in a silver mine and I call it beggar's tomb/I got me a violin and I beg you call the tune." At other times the jam has a wild pace to it, the drums and guitar racing.

Bob Weir comes in too early on the vocals to "Estimated Prophet" after a jam, then stops, then starts again tentatively. But the jam at the end of it is pretty good, though definitely on the mellow side.

"Jam 1" is a strange jam, with Jerry and Bob going wild on guitar and with some interesting keyboard work behind it at the start. The jam has a strange pace to it. The drums are cooking, then drop out for a moment. Phil does the bass line from "He's Gone" fairly early in the jam, then stops.

The jam leads into a wonderful version of "He's Gone." "Nothing left to do but smile, smile, smile." Indeed. The end of the song is beautiful, the vocal riff section, and then Jerry's guitar part.

"The Other One" comes on with a burst of explosive energy. Sure, Jerry comes in one line too soon with "Coming around," stepping on Bob's vocals, but it doesn't matter. The band makes it work. The instrumental section of this song is different from most versions of "The Other One." During the second verse, Phil Lesh's bass is this vicious beast, and Brent Mydland's keyboard is just amazing. This is a strange and wonderful version of the song.

"The Other One" leads into "Drums," which is very mellow at first, with lots of hand percussion.
Third Disc Has Buddy Holly's "Not Fade Away"

The third disc has a nice version of Buddy Holly's "Not Fade Away," with a cool loose jam.
Despite some off notes at the beginning of "Brokedown Palace," this is a good version of the song. The vocals sound great.

The Grateful Dead ended the second set that night with a pair of Chuck Berry songs, "Around And Around" and "Johnny B. Goode." On "Around And Around," Bob Weir is totally goofing on the vocals, stuttering and so on. Very odd.

For the encore that night, the band did an incredible version of "Shakedown Street." Everything about this version is just exactly right. The vocals sound great. The jam is funky and fun and loose.

At the time of this concert, the song was just over a year old, and the band was seeing just what they could do with it. "Shakedown Street" was written by Jerry Garcia and Robert Hunter.
"Shakedown Street" leads into the end of "Uncle John's Band."

Brent Mydland had joined the band eight months before this show. His first concert performance with the Grateful Dead was on April 22, 1979.

The following is the track list for "Dick's Picks Volume Five":

This CD is the first volume of the "Dick's Picks" series to contain an entire concert rather than just a set or selections from a show. "Dick's Picks" was started in 1993 by Dick Latvala, the official Grateful Dead tape archivist. Volume Five was the third volume to be released after Jerry Garcia's death. Dick's Picks Volume Six contains the entire show the Grateful Dead performed at the Hartford Civic Center in Hartford, Connecticut, on October 14, 1983. In all, thirty-six volumes were released between 1993 and 2005.
Posted by Michael Doherty at 4:03 PM