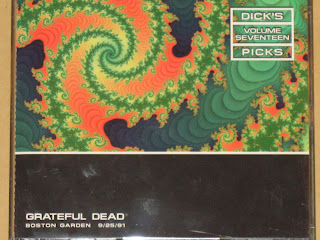 This three-disc set has the complete concert from September 25, 1991 at the Boston Garden, and includes the band's first ever performance of Paul McCartney's "That Would Be Something."

This three-disc CD is a concert recording from the Boston Garden, in Boston Massachusetts, September 25, 1991. This show was the fifth in an amazing six-night run at the Boston Garden. All six shows were great. It seemed the band was getting better and better with each succeeding night.

First CD Starts With "Help On The Way"

The first CD opens with "Help On The Way" into "Slipknot!" into "Franklin's Tower." There is some interesting jamming on "Slipknot!" Earlier in the six-show run, the band had performed "Help On The Way" into "Slipknot!" into "Fire On The Mountain," which had confused and delighted everyone there. (Here's hoping the Dead will release that show on CD at some point.) But on the 25th, they did the usual "Franklin's Tower," and it's a good, lively version of it.

There are also nice lively versions of "Dire Wolf" and "Tennessee Jed" on the first disc. Also, a nice "The Music Never Stopped" as the first set closer ends the first CD.

The jam leads into the wonderful "Terrapin Station," one of the best songs the Grateful Dead ever performed. This is a pretty good version of it too. When Jerry cries, "Inspiration," everyone at the concert can't help but be moved.

The jam out of "Terrapin" is titled "Boston Clam Jam" for this CD release, but Deadbase doesn't list this as a separate song. Bruce Hornsby stays on stage longer than most of the other band members, and plays a bit of "Terrapin" just before leaving the stage to Bill and Mickey.

For a short while the drummers used the audience as one of their instruments by signalling them to make a vocal response. This is a soundboard recording, so it's not as audible as it would be on an audience tape, but the audience is part of the band for the early part of "Drums." Mickey and Bill venture off into odd places, leading the way for the rest of the band to do the "Space" segment of the show.

Third Disc Opens With "That Would Be Something"

"Space" led into the first ever performance of Paul McCartney's "That Would Be Something." At the time, it seemed that Jerry just sort of stumbled into this song, but listening to it now, it seems the band might have rehearsed it at least once. But it quickly gives way to the second half of "Playing In The Band."

The last two songs on the third CD are from a different show, used here as filler. They're from the second set of the show performed on 3/31/91 at Greensboro Coliseum.

Vince Welnick had been with the band for about a year, as had Bruce Hornsby. They joined after keyboardist Brent Mydland died in July of 1990 (right after the summer tour).

The following is the track list for Grateful Dead's Dick's Picks Volume Seventeen:

Posted by Michael Doherty at 1:29 PM