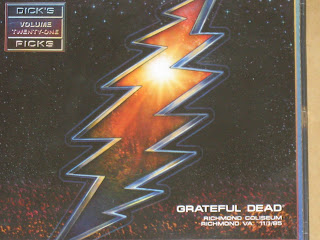 Dick's Picks Volume Twenty-One contains the entire concert the Grateful Dead performed at the Richmond Coliseum in Richmond, Virginia on November 1, 1985. It also contains some bonus material from September 2, 1980.

The first disc starts with a somewhat messy, but totally energetic version of "Dancing In The Streets," leading into "Cold Rain And Snow" - two songs from the band's early days. The crowd is clearly excited. This is a good version of "Cold Rain And Snow," with Jerry Garcia really belting it out. Often during those years, Jerry's voice sounded strained. Not on this song. He sounds great.

"Little Red Rooster" features some very cool keyboard work by Brent Mydland. The first disc also features a nice version of "Big River," with some really good guitar work and some strange stuff on the cymbals.

The version of "Brown-Eyed Women" on this CD has a really good groove. Jerry and Brent's voices together are awesome.

"Jack Straw" is almost always good, but this is a particularly wonderful version. The vocals are phenomenal, with so much raw emotion, so much power, so much beauty.

The first disc ends with a rocking "Don't Ease Me In." There is some great stuff on the keyboards by Brent, and Phil Lesh works his way up and down the bass, finding wonderful grooves. This version also features some excellent vocals.

The second disc starts with "Samson And Delilah." But right at the beginning someone says, "It's got to be funky." Who says it? It's totally weird. It sounds like a DJ speaking over the recording. There is no explanation in the liner notes. It's a good version of the song, with some serious energy.

Jerry Garcia's voice does strain a bit during "High Time," but it's such an emotional tune that he makes it work. It only adds to the feel of the song, like when he starts singing, "You told me goodbye/How was I to know/You didn't mean goodbye/You meant please don't let me go."

The band then goes into a wonderful version of "He's Gone." This is an incredibly emotionally charged rendition. "Nothing left to do but smile, smile, smile." Oh yes. This version has a nice extended vocal riffing section near the end.

That leads right into "Spoonful." Bob Weir's vocals just explode at the beginning, from the mellow instrumental introduction. Just wonderful.

Jerry Garcia was clearly in a certain soulful mood this night, because after "High Time" and "He's Gone," he chooses another beautiful and moving tune: "Comes A Time." Wow, his guitar is crying out to the audience. This version is almost heartbreaking, and the crowd responds enthusiastically when Jerry repeats, "Only love can fill" with a raw edge near the end of the song. The song then starts to end (too soon), with the drummers seemingly ready to go into their solo, until Jerry brings it back.

This then leads into a really nice version of "Lost Sailor." Bob Weir's vocals sound sweet, especially at the end, as he sings, "drifting and dreaming." For a moment it sounds like the band might go into "Saint Of Circumstance," as expected, but instead this leads into "Drums." And it's a very cool, fun version.

Third Disc Features "She Belongs To Me" And "Gloria"

The third disc starts with "Space," leading finally into "Saint Of Circumstance." From there, the band goes into "Gimme Some Lovin.'" This version is initially messy, but it's full of energy and drive. Phil Lesh and Brent Mydland are singing their hearts out, and Brent also does some great stuff on the keyboards.

That leads into Bob Dylan's "She Belongs To Me." Jerry's voice sounds great on this one. It's a truly beautiful rendition of the song. This is a song that the Grateful Dead did only in 1985 (except for one time in 1966).

After "She Belongs To Me" the band jumps into a lively version of "Gloria" to end the second set. Bob Weir is clearly having a great time with this song, stopping it with, "Wait a minute," and then building it again. He also goofs around with references to the space shuttle and jokes about spelling. The energy in this song is incredible.

The encore is "Keep Your Day Job," and this is a lively version of it.

The last four tracks on the third CD are bonus tracks. They come from the second set of the concert the Grateful Dead performed in Rochester, New York on September 2, 1980. According to the liner notes, this segment is all that exists of the show in the Grateful Dead's vault. These tracks include an oddly slow version of "Iko Iko" and a beautiful "Morning Dew."


The Dick's Picks series was started in 1993 by official Grateful Dead tape archivist Dick Latvala. There were thirty-six volumes in all, released from 1993 through 2005. In more recent years, a new series of live recordings titled "Road Trips" has taken its place.
Posted by Michael Doherty at 1:40 PM