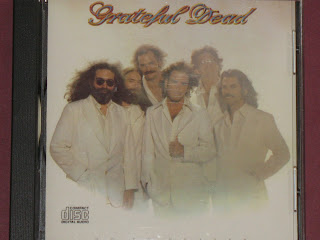 This album features Brent Mydland's first songs for the band: "Far From Me" and "Easy To Love You."

Go To Heaven is Brent Mydland's first album with the Grateful Dead. He first performed with the band on April 22, 1979, after the band fired Keith Godchaux.

"Alabama Getaway"
The album opens with "Alabama Getaway," a lively rock tune that Jerry Garcia sings lead on. The first concert performance of this song was on November 4, 1979, in Providence, Rhode Island. The Grateful Dead often opened their concerts with this song in the 1980s.

"Far From Me" Features Brent Mydland
"Far From Me" is a song written by Brent Mydland. Brent had joined the band only the previous year, and Go To Heaven was the first album he appeared on. It didn't take him long to introduce songs to the band's repertoire. Two of those songs are included on this album. "Far From Me" was first played in concert on March 30, 1980.

This song is about the end of a relationship, a theme that Brent would return to in other songs. Brent sings, "This time's the last time I wanna say so long/This song is my last song for you/There's just nothing here to hold on to, baby/Nothing to hold on to."

Brent Mydland would always feel like the new guy, even though he was with the band longer than any other keyboardist. But at the time of this album he really was the new guy. In the photo on the cover for this album he seems to be almost hiding behind Jerry Garcia, like he's still not quite sure whether he's really in the band or not.

"Althea" is probably the most beloved song from this album among Grateful Dead fans. This song contains references to William Shakespeare's "Hamlet," with lines like, "You may be the fate of Ophelia, sleeping and perchance to dream/Honest to the point of recklessness, self-centered in the extreme." The lyrics were written by Robert Hunter, and the music by Jerry Garcia.

"Feel Like A Stranger"
"Feel Like A Stranger" was first played by the Grateful Dead on March 31, 1980 in New Jersey. This song was often played early in a concert, which makes sense, especially given the lines, "Well you know it's gonna get stranger/So let's get on with the show" and "It's gonna be a long long crazy crazy night/Yeah crazy night/Silky silky, crazy crazy night." The lyrics were written by John Barlow, and the music by Bob Weir.

"Lost Sailor" And "Saint Of Circumstance"
"Lost Sailor" is a wonderful song that was often paired with "Saint Of Circumstance" in concert performances. Both songs were written by Bob Weir and John Barlow, and both appear on this album. The audience would often cheer at the line, "Ooh where's the dog star," mishearing it as, "Ooh where's the Dark Star." "Dark Star" was one of the band's best and most loved songs.

"Saint Of Circumstance" has the excellent line, "I'm still walking so I'm sure that I can dance."

As a side note, there is a Grateful Dead cover band named Antwerp's Placebo.

"Easy To Love You"

"Easy To Love You" is Brent Mydland's second song on Go To Heaven. It's a straight-forward, unabashed love song. The Grateful Dead first played this song on August 14, 1979, only four months after Brent's first concert appearance. It was the first song that he introduced into the band's repertoire. Brent Mydland wrote the music, and John Barlow wrote the lyrics.

"Don't Ease Me In" is a song that the Grateful Dead had been performing in concert since 1966. It's a traditional song. It's fun, lively. In later years, they'd often close the first set with this song.

The following is the track list for Grateful Dead's Go To Heaven:


Go To Heaven was released April 28, 1980 on Arista Records. The Grateful Dead started releasing albums on Arista in 1977 with Terrapin Station. Go To Heaven would be the last studio release by the band until 1987's In The Dark. In between those two, they did release a couple of live albums.
Posted by Michael Doherty at 3:30 PM