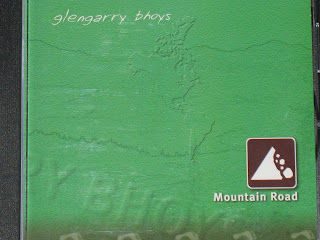 Mountain Road is a CD of mostly traditional songs, but played with a rock drive. There are only three original tunes on this one, all three written by lead vocalist/guitarist Graham Wright. The Glengarry Bhoys, hailing from Ontario, are tremendous fun. These are seriously talented musicians - with a music so potent it could impregnate a photograph.

"Donald"
The CD starts with a bang. "Donald" is rock and roll with a Celtic bent. Like taking folk and running it through an electric storm - the music infused with a power from the heavens. The song has some nice changes near the three minute mark, when the bagpipes take control.

The album continues with another traditional song. The CD lists it as "Star," but the actual title is "Star Of The County Down." It's a fantastic song, and the Glengarry Bhoys do a phenomenal job with it, giving it a more pronounced beat. This is a band to dance to. They have a great way of making traditional tunes feel like their own. "Star" speeds up just before the end.

"'H' Is For Her"
"'H' Is For Her" is a traditional song, an instrumental. This rendition is less of a departure from the traditional feel, mainly because the fiddle drives the song. It's still fun to dance to, but its power is of a different sort. This song has a bright and happy feel to it.

"Tiree Love Song" is a slower, mellow tune. It's sweet and gorgeous, sounding like a love song written by the ocean to a mountain.

"Mountain Road"
The title track, "Mountain Road," is an instrumental. This one is a lot of fun, emphasizing the beat, urging all who hear it to dance. It has some pop sensibilities, particularly prominent at approximately a minute and a half in, with a great bass line. This song will have its listener with both legs kicked high in the air, and no need to bring them down, no need to rest - until the song ends and everything crashes to the floor.

This is one of the three original songs on this album, written by Graham Wright. And it has a strikingly personal feel to it. There is a verse about him taking his daughter home, taking her across the country. And the song's title is his daughter's name.

I could personally do without the shout of "Freedom" near the end, for it needlessly reminds me of a certain film - but other than that, it's a great song.

"Barb's Kitchen"
"Barb's Kitchen" is back to a more traditional feel - and again mainly due to the fiddle. But this one also has some light, playful piano accompaniment, that is, frankly, delightful. It also has what at first sounds like spoons, but later it becomes clear it's actually audible step dancing. A wonderful addition - albums almost never include that. The step dancing is done by Shelley Downing and Donna Downing.

"Over The Mountain" is an amazingly beautiful song, a soft and sweet and heartfelt love tune, written by Graham Wright. It begins, "Over the mountain/Through the glen/And down by the sea/And that's where I met my true love/Waiting for me."

The singer laments how it's been a long time that she's been gone, that their children have grown and moved away. So he closes his eyes to drift back to her warm embrace, and the song has a palpable yearning. It has us all reaching for that embrace, for a lost love - for a return to a land and time kept alive in memory. The song takes us over the mountain and to the edge of the ocean, then takes our hands as it guides us gently under the waves.

Some frantic fiddle and percussion at the beginning of "Pick Me Up" lead into the vocals. This song's chorus is the closest the band gets to pop song territory on this album. And as such it's probably the weakest song on the album. That's not to say it's a bad song, for it's not. But it's not as strong as the other material. Part of the chorus is, "I'm full of rage/I hate this place/My life's a disgrace." This song has an abrupt ending. "Pick Me Up" was written by Graham Wright.
"Full Contact" is an instrumental track. The drums start off the song, but it's not long before the glorious howl of the bagpipes joins in.

The album ends with a strange electronica techno trance version of the title track. It's completely unnecessary, and is of a totally different mood from the rest of the album, like from a different universe. But why not? It actually works as a techno tune, once the listener is able to switch gears.

Oddly, there are some vocals in this version, through the regular version is an instrumenta. The vocal section is brief, the main line being, "The road is long."

The Glengarry Bhoys are, as of the time of this recording: Graham Wright on guitars and lead vocals; Shelley Downing on fiddle and vocals; Nigel Bazinet on bass and vocals; Matthew Ramerman on drums and percussion; and James S. Libbey on highland bagpipes, small pipes, whistles, trumpet, keyboards and vocals.

Mountain Road was released through Keltic Cross Entertainment in Ontario. The Glengarry Bhoys have released several other albums, the most recent being Eight (2010).

By the way, this band puts on an excellent concert, so don't pass by a chance to see them perform.
Posted by Michael Doherty at 4:44 PM