The Dovells: "For Your Hully Gully Party/You Can't Sit Down" CD Review 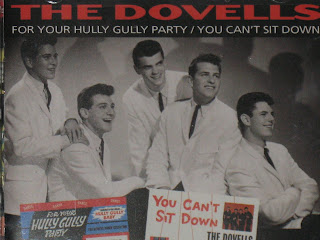 This 2010 release contains two great early rock and roll albums that have until now never been available on CD.

Collectors' Choice Music is continuing its series of great early rock and roll releases with four more titles this month, including this incredibly fun CD by The Dovells.

The Dovells are known mostly for their 1961 #2 hit "Bristol Stomp." Because of the popularity of that song, an LP was rushed into production - their first. More time and care were taken on their next two albums: For Your Hully Gully Party and You Can't Sit Down, both of which are presented in their entirety on this release. Neither of these albums were previously released on CD.

On For Your Hully Gully Party, The Dovells seemed to be out to answer the question, How many songs can be written with the words "Hully Gully" in the title? Four of the album's twelve songs are about the "Hully Gully." And why not?

This album is full of great early rock 'n' roll dance tunes. As the title promises, these songs are custom-made for a dance party. In addition to the Hully Gully, there is The Jitterbug, The Madison, The New Continental, and even a song about The Bristol Stomp.

Kal Mann and Dave Appell wrote half the songs on For Your Hully Gully Party.

The album opens with "Hully Gully Baby," the first of the four Hully Gully tunes. And it's a fun one, complete with hand-claps and saxophone, as well as a great rhythm. It was written by Kal Mann and Dave Appell. The Dovells sing, "All I want to do with you is Hully Gully, baby."

"The Jitterbug" was written by Dovells members Len Borisoff and Jerry Gross. Like a lot of rock and roll from this time, it contains references to other songs like "Blue Suede Shoes," "The Stroll" and even "Bristol Stomp," The Dovells' first big hit.

As mentioned, "Bristol Stomp" was the band's breakout hit single. "Stompin' Everywhere" is about that song and how it caught on and became insanely popular. This might sound like a bit of self-congratulation on the band's part, but this song is so much fun that it doesn't matter.

Here is a bit of the lyrics: "Stompin' here, stompin' there/Now they're stompin' everywhere/It went from Bristol to Philly town/And then the kids in Atlanta, they spread it round."

This is another great Mann/Appell-penned tune, and it includes lines like, "It used to be they would call the steps for you/And now you're free - do the steps you want to do."

"Country Club Hully Gully," the third Hully Gully song, gets even sillier. It's about Hully Gully, a poor guy from Miami, who became classy, and does his own dance, shaking "his chassis."

"Why Not Why Not You"

"Why Not Why Not You" is one of those great vocal rock tunes with an excellent pace and rhythm. And yes, of course it also has hand-claps and some fantastic sax. This is one of the best tracks on the album.

On an album titled For Your Hully Gully Party, it would be ridiculous for the original Hully Gully to not be included. And this is a fun version. The Olympics had a hit with it first in 1959. "Hully Gully" was written by Fred Sledge Smith and Clifford Goldsmith.

For Your Hully Gully Party concludes with "Stop, Look And Listen," which is probably the weakest tune on the album. Even so, it still has a good beat.

"You Can't Sit Down"

On the original release, "Short Fat Fannie" was listed as "Short Fat Fanny." Like the second track on For Your Hully Gully Party, this second track from You Can't Sit Down mentions other rock hits like "Blue Suede Shoes," "Blueberry Hill" and "Hound Dog."

Another of this CD's highlights is "36-22-36." Obviously the title refers to a woman's measurements. This song has an excellent groove, and some wonderful work on saxophone, as well as great backing vocals.

Written by Deadric Malone, this song was included on Bobby Bland's 1962 release, Here's The Man. The singer boasts of his girlfriend with lines like, "Eyes on, hands off, 'cause she's mine, all mine," "I know you would steal her if you only could" and "Everyone turns when she walks in/Whoa, how they pop their eyes."

The Dovells' version of "Maybelline" is good but doesn't quite have that raw power that Chuck Berry's original version has. But it does feature some interesting work on organ.

"Wildwood Days" was the advance single from this album. It's a good tune, but it was the flip side, "You Can't Sit Down," that became the hit. "Wildwood Days" was written by Kal Mann and Dave Appell. And acually, later that year Bobby Rydell's recording of it would be a hit.

This song has the line "Every day is a holiday and every night is a Saturday night." Just like it is for the unemployed.

"If You Wanna Be Happy"

"If You Wanna Be Happy" is one of the silliest, strangest songs from this era, and yet it's also a great dance tune. If offers some odd advice: "If you wanna be happy for the rest of your life/Never make a pretty woman your wife/So from my personal view/Get an ugly girl to marry you."

It also features these lines: "A pretty woman make her husband look small/And very often causes his downfall/As soon as he marries her, then she starts/To do the things that will break his heart."

"If You Wanna Be Happy" was written by Frank Guida and Joseph Royster. Jimmy Soul had a number one hit with it in 1963.

You Can't Sit Down concludes with "Havin' A Good Time," a fun song about simply enjoying one's self. Having a good time is what rock and roll is all about. With lines like, "I'll be dead in the morning, but I'm living it up tonight."


The Dovells are Jerry Gross (who went by Jerry Summers), Len Borisoff (who went by Len Barry), Mike Freda (who went by Mike Dennis), Jim Meeley (who went by Danny Brooks) and Arnie Silver (who became Arnie Satin).

This CD is scheduled to be released November 23, 2010 through Collectors' Choice Music in conjunction with ABKCO Music & Records. Three other selections in the Cameo-Parkway series will be released that same day: Dee Dee Sharp: It's Mashed Potato Time/Do The Bird; John Zacherle: Monster Mash/Scary Tales; and a compilation titled Cameo-Parkway Holiday Hits (which features a very young Bob Seger).