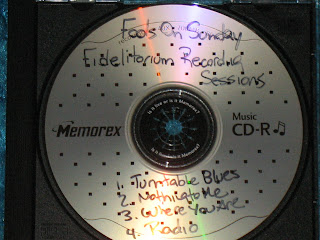 Fools On Sunday is a rock band based in Westchester County, New York. They formed in 2009, covering punk songs. At the beginning of 2010, they began writing and performing original songs, moving in more of a rock direction, with some bluesy overtones. But that's not what makes this band interesting.

What makes this band so interesting is that they formed when guitarist Stuart Lederer told his friend, bassist Marc Seligman, that he had throat cancer and that he might not survive. He wanted to form a band, and go out performing. Marc Seligman wanted to involve his son in the project. His son, Evan, was eleven at the time.

To have an eleven-year-old fronting a punk band is pretty unusual in itself. But when they began performing original material, it was Evan (who is now thirteen) who wrote all the lyrics and most of the music. That is even more unusual. On top of that, the songs are good, and the kid can sing. He has a good voice, and seems to have control of it too.

The band began rehearsing regularly on Sundays (thus, their name). Stuart's health improved and in 2010 the band has done approximately three dozen shows.

Fidelitorium Recording Sessions is a four-song EP which features original material from this power trio.

"Turntable Blues"
"Turntable Blues" begins with a simple drum beat. It kicks in like one of the bluesy rockers by Led Zeppelin, an obvious influence on this band. It's pure and honest. Evan sings, "I've got the turntable blues/Spinning round in circles/But I just can't fall into a groove."

He goes to his favorite record store and buys an album, but when he gets it home, he finds that it's warped. It's great that a thirteen-year-old kid even knows what a record is, never mind appreciating vinyl enough to purchase it. You can't help but love this song, and this band.
Evan plays acoustic guitar on this song.

"Nothing To Me" is a seriously catchy pop-rock song with the repeated lines, "You were the dream/And now you're nothing to me." This is probably the best track on the CD. Evan plays piano on this one. It's brief, at less than two minutes, and is over way too soon.

"Where You Are" is another Led Zeppelin-type rock song with guitar riffs clearly influenced by Jimmy Page. Evan sings, "When you're going to the top/You don't know where you are."

"Radio" is a really cool song. It's an interesting mix of pop, hard rock and punk. It features a great punk bass line by Marc Seligman, and a nice guitar solo from Stuart Lederer. Evan plays piano on "Radio." He sings, "On the radio/That's where I go." Marc Seligman and Evan Seligman wrote the music for this one.


Fools On Sunday is Evan Seligman on vocals and drums, Stuart Lederer on electric guitar and Marc Seligman on bass. Stuart Lederer also played with the Los Angeles punk rock band The Flesh Eaters as well as The Penetrators. Marc Seligman played in punk bands such as The Mad Violets, The Vines and The Cyclones. Evan Seligman starred for two seasons on the television show Wonder Showzen, and appeared in the 2007 horror film Joshua.

Fidelitorium Recording Sessions was recorded and mixed by Mitch Easter, who is best known for producing the early R.E.M. records (and also records by Pavement, Suzanne Vega and Marshall Crenshaw).

The release date for this EP has not yet been determined. But folks can visit the band's website to listen to these songs now. It is likely that this EP will be released on vinyl, which is totally appropriate, especially given the lyrics of the first track.