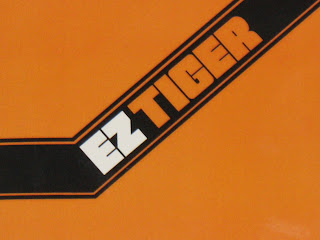 The self-titled debut album from EZ Tiger has everything one could want or expect from a rock album: infectious rhythms, excellent vocals (and backing vocals), interesting and moving lyrics. On top of it, this band has heart.

This band doesn't hold back - in any area. They rock, but they also don't shy away from pop grooves. Tina DiGeorge (the lead singer and guitarist) has both power and vulnerability in her voice.

The albums kicks off with "Legend," a fun rock tune with an infectious groove. There is no easing into this album. Turn it up, dance around your apartment. This is one of the band's best songs.
There is a quiet moment toward the end, when Tina DiGeorge sings, "It's the first thing that you'll hear/Whispers fall and disappear to the stars." And then it kicks in again with glorious gusto. It's an excellent moment, and is representative of what this band is about.

"The Kill" has a heavy, steady bass rhythm by Tina Pascual. This song is somewhat reminiscent of that great early work from Joan Jett & The Blackhearts. Something in the vocals, especially at the beginning. This song features some really good lyrics, like these lines: "Send every clue you can/I swear I'll use them all until I understand/Leave, it's just a tease/There's no relief beyond the stars that I can see."

"What Is Fair" is another fun song with a pop groove and vocal line. And it features some of the best lyrics of the album (an album that's full of excellent lyrics). Check out these lines: "Before you walk the length of your soul/To defend the unknown/Will you rest inside your head/And tell me what's there/I will be somewhere in between/Your thoughts and your dreams/What is fair."

Kristy McInnis's drumming on this track is just phenomenal. There is something akin to Ginger Baker in the way she sometimes keeps time on the floor tom. But in a way, she's actually looser than Ginger, approaching Keith Moon in style.

"Stay" is another of EZ Tiger's best songs. It's - dare I say it - absolutely beautiful. And seriously catchy. And this version benefits from Scott Bennett's presence on keyboards and Probyn Gregory on trumpet. This is probably the CD's best track.

"Dancing For Dimes" has a hard punk edge. The guitar line is at times reminiscent of some of the best work by the Buzzcocks. And the guitar work at the end is tremendous. On drums, Kristy is given room to do some wonderful fills.

This is a hint of fury in Tina's voice as she sings, "Eyes that burn me, skin that does me in/Tire marks on my forehead again" and "I want to set you up, I want to tear you down."

"Any Other Day" is a mellower song, but still with a definite power. Kristy's beat is perfect. This track has a certain beauty, certainly enhanced by Hope Easton on cello. Yes, cello can work beautifully on a rock album.

Tina's vocals are excellent, particularly in the refrain, "This is gonna save your life." There is a certain vulnerability in the vocals too, as she sings, "Any other day/It wouldn't even matter/What you had to say/When the ashes start to scatter/Where they hit the ground/The sidewalk turns to gravel/And you hear the sound/Of diamonds when they shatter."

"Any Other Day" is definitely another highlight of this album.

"Last One In" is a wonderful pop rock tune with high energy and some fantastic blending of vocals. It has such an awesome groove, with a great rock 'n' roll guitar line. Here is a bit of the lyrics: "It's bound to come sneaking up again/You wonder where and when/While they swim/You're still the last one in."

Anna Rosales provides additional backing vocals on "Last One In."

The CD concludes with "Tiger Trance." A wonderful bass line by Tina Pascual is at the heart of this song.

Tina DiGeorge's voice is seriously beautiful on this one. She is doing different things on this track than on the others, as she sings, "You still hide away/Bouncing off the silhouette of your love." But really, everything is different on this track. It has an almost trippy feel, with guitar work that is reminiscent of Robby Krieger or perhaps something from Sky Cries Mary (remember that band?).

Scott Bennett plays keyboards and percussion on this CD, as well as contributes backing vocals to "Romp" and "Tiger Trance." Scott Bennett also produced the album.

This CD was released October 19, 2010. The band had its official record release party October 15 at Molly Malone's in Los Angeles. This is the first full-length album released by EZ Tiger, though the band did release a five-song self-titled EP last year.