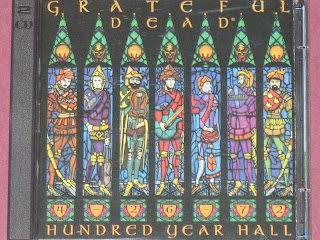 This 2-disc set contains more than two hours of Grateful Dead live music, and yet is only approximately half of the show they performed on 4/26/72.

Hundred Year Hall contains a lot of the concert the Grateful Dead performed on April 26, 1972 at Jahrhundert Hall in Frankfurt, West Germany. This show was part of an extensive, two-month European tour.

The first CD kicks off with "Bertha." This song often had a high amount of energy when the Grateful Dead performed it in concert, but this version surpasses most versions of the song. The band is cooking here.

This leads into a playful version of "Me & My Uncle." This is a song that the Grateful Dead performed more than six hundred times in concert.

First Disc Includes "Jack Straw" And "Playing In The Band"
"Jack Straw" is one of those wonderful Grateful Dead songs that seem to just bring everyone together. This song makes the audience feel good. And this is a really great version of it.

The version of "Playing In The Band" on this CD is relatively short, but it's good. Donna Jean Godchaux's backing vocals are crackling. And even though the jam isn't that long (by "Playing" standards), it's still pretty awesome, with Jerry Garcia's guitar pushing the band upward and out.

Ron "Pigpen" McKernan sings lead on "Next Time You See Me," a song written by William Harvey and Earl Forest. He also plays harmonica on this song. This European tour was Pigpen's final tour. He would do just one more show when the band returned to the United States.

Ron "Pigpen" McKernan was the Grateful Dead's first keyboardist. He was a bluesman, and was not into the acid scene (preferring alcohol to hallucinogens). By the time of this 1972 European tour, he was joined by Keith Godchaux on keyboards. (Keith would continue to play keyboards in the band until 1979.)

The first disc of this album also contains "Turn On Your Lovelight," Pigpen's signature piece. The song has Pigpen's own sort of jam, a vocal improvisation section with call and response with the rest of the band. But this version doesn't contain as much of the vocal improvisation as other, earlier versions of this song. And of course, at nineteen minutes, this song contains plenty of the band jamming.

"Turn On Your Lovelight" contains teases of "Going Down The Road Feelin' Bad" toward the end, and even a bit of the drumbeat for "Not Fade Away."

"Going Down The Road Feelin' Bad"

"Turn On Your Lovelight" finally does lead into "Going Down The Road Feelin' Bad," a song listed as traditional, but which was most likely written by Woody Guthrie. It's famously used in the film version of Steinbeck's The Grapes Of Wrath.

The first disc ends with "One More Saturday Night," a song that would be featured on Bob Weir's "Ace." That album would be released soon after this concert was performed, and while the band was still on its 1972 European tour.

"Truckin'" Opens 2nd CD
The second disc opens with "Truckin'," a song that would soon become an anthem of sorts for Dead fans, with its lyrics about being hassled by the law and its refrain of "What a long, strange trip it's been."

There is a drum solo approximately fourteen minutes into the song, which leads into "The Other One."

2nd Disc Features A 36-Minute Version Of "The Other One"

"The Other One," which for some reason is listed as "Cryptical Envelopment" on this CD, jumps into high gear right away. The jam is intense and fiery, as if to drive off some evil spirit. The jam then settles down into a mellow, tentative groove. The lyrics start approximately thirteen minutes into the song, and then it's soon back into spacey jam territory. The second verse comes thirty-five minutes in, just before the end of the song.

"Comes A Time" And "Sugar Magnolia"
That leads into the beautiful and mellow "Comes A Time." This song would be released on Jerry Garcia's third solo album, Reflections, in 1976. It was played sporadically throughout the Grateful Dead's career.

The album concludes with the always-pleasing "Sugar Magnolia."

The following is the track list for Grateful Dead's Hundred Year Hall:

Robert Hunter, who wrote the lyrics to many of the Grateful Dead's songs, wrote the liner notes for this CD on April 28, 1995. The album was released on September 26, 1995, a month after the death of Jerry Garcia.
Posted by Michael Doherty at 3:37 PM