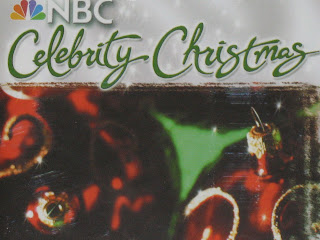 NBC Celebrity Christmas is a collection of holiday songs sung by actors whose programs were on NBC in 2000 (at the time of this recording). As one might guess, the vocal talent ranges from "Hey, I'm sincerely trying" to "Gosh, I'm surprisingly good."

Part of the proceeds from this album went to benefit the Children's Miracle Network, an organization that raises money for children's hospitals.

The CD opens with Sean Hayes singing "The Christmas Song (Chestnuts Roasting On An Open Fire)." Sean Hayes has a good voice (he is in Promises, Promises, a musical based on The Apartment), but this rendition is a bit on the dull side. The thing that keeps this song from being completely bland is Dave Koz on saxophone.

Sean Hayes was of course one of the stars of Will & Grace.

"Baby, It's Cold Outside"

"Baby, It's Cold Outside" is one of the season's best songs. It's not specifically a Christmas song, but that's one of its strengths. The best version is the one by Ray Charles. But Bebe Neuwirth and John Lithgow really play the song's inherent comedy well.

Bebe Neuwirth is particularly wonderful in her reading of the line "Say, what's in this drink?" and also the line, "I ought to say no, no, no." She actually has a great voice. And John Lithgow is funny, especially in the improvised section. His "Bebe, baby" bit will get laughs from most listeners.

Bebe Neuwirth played Nikki Masucci on Deadline, but she is more famous for her role of Lilith on Cheers. John Lithgow played Dick Solomon on 3rd Rock From The Sun.

"Baby, It's Cold Outside" was written by Frank Loesser.

"Have Yourself A Merry Little Christmas"

Katey Sagal's contribution to this CD is "Have Yourself A Merry Little Christmas." And she does a really good job with it. Hers is one of the best vocal performances on this compilation. And that shouldn't be a surprise, as she has a background in music. Before becoming famous for her role on Married With Children, Katey Sagal sang backing vocals for Bob Dylan, Tanya Tucker, Bette Midler and Gene Simmons. She also released a CD titled Room in 2004.

Katey Sagal was on the NBC show Tucker at the time of this recording, but she's probably still best known for her role on Married With Children. Jack White plays drums on this track.

As one might expect, Marie Osmond turns in one of the best vocal performances on this compilation. Unfortunately, "O Holy Night" is a fairly annoying song.

Though she was not part of the NBC lineup at the time of this recording, Marie Osmond was co-founder of the Children's Miracle Network. Thus, her inclusion on this compilation.

Just Shoot Me's Wendy Malick doesn't have the greatest voice, but she picked a song she could have some fun with, and she certainly does that. Who wouldn't get her a sable coat when she playfully teases, "I've been an awful good girl"? This is one of the most fun of all the songs on this album. At the end she sings, "Hurry down my chimney tonight," and then purrs.

There is some nice work on guitar by Tim Pierce, and on piano by Ellis Hall.

Jane French is a singer/songwriter who is featured on this compilation because she sang the theme song to NBC's Passions. Her version of "The First Noel" is strong, and has some nice work on acoustic guitar by Tim Pierce.

"Winter Wonderland" is a song that has been covered many, many times, by such diverse artists as Tony Bennett, Frank Sinatra, Dolly Parton, Elvis Presley, Cyndi Lauper, and Ozzy Osbourne & Jessica Simpson (yes, as a duet - it's terrifying). Jane Leeves does a surprisingly good version. She is adorable, actually.

Jane Leeves is still best known for playing Daphne on Frasier. Though probably the coolest show she ever worked on was The Benny Hill Show.

"Coventry Carol" is beautiful song written in the sixteenth century that includes a verse about King Herod ordering the slaughter of all male infants. Alex Kingston, who played Dr. Elizabeth Corday on ER, does a wonderful job with it.

At the beginning of the song, they're joking around about their Christmas trees, which is kind of fun. But then they start the song, and it all goes downhill. This is a terrible song, no matter who is singing it. This rendition has some value as a novelty, but that's it.

"'Twas The Night Before Christmas"

This compilation concludes with Jay Leno doing a spoken word reading of "'Twas The Night Before Christmas," to keyboard accompaniment. Jay puts so much energy into his reading, it's impossible to dislike it.

J.T. Thomas plays bits of "O Christmas Tree," "We Wish You A Merry Christmas" and other holiday songs on keyboard.