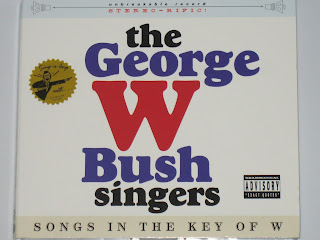 The George W. Bush Singers take bits of speeches from the 43rd president, and sing them. The results are wonderful and hilarious.

Is George W. Bush the most stupid man on Earth? Or are we simply "misunderestimating" him? It's anyone's guess, but this album by The George W. Bush Singers allows U.S. citizens and foreign dignitaries alike to laugh once again at his silliness and antics and complete disregard for the English language.

The idea behind this album is simple and yet brilliant - take some of his key speeches and turn them into songs. The songs include bits from his actual speeches, which then these singers sing along with him. In some ways the album is more enjoyable now that he's out of office. After all, at the time it was terrifying - the thought that this simpleton, this moron was the leader of the United States. But now there is some distance, and folks can look back in amusement as well as utter bewilderment.

Different tracks are sung to different musical genres, and all work wonderfully. Hearing George W. Bush say "nucular" to a reggae beat, for example, is simply perfect. This album is hilarious. And yes, many of George W.'s invented words are included - and in song! Hurrah! By the way, "ingrinable" is his word for "integral," for those who are wondering.

The album begins with "Welcome," which is a choir simply introducing itself. The title of the track is no lie. No deception on the part of the George W. Bush Singers, no matter how much deception was perpetrated by the man whose namesake they are.

"War In Iraq"
"War In Iraq" has a country feel. It begins with an actual sound bite from George W. Bush, and then the folks sing it. Part of what Bush says is, "I hope we're not headed to war in Iraq. I'm the person who gets to decide, not you." Hilarious and horrible.

"Deep Thoughts"
"Deep Thoughts (Part I)" has a joyous 1960s rock musical sound. It features a series of great one-liners from the moron. Bits like, "You know, it will take time to restore chaos" and "Poor people aren't necessarily killers" and of course "We'll be more better at cleaning our air."

"Deep Thoughts (Part II)" also has a great early rock sound. Instead of many funny one-liners, this track has just one line, sung many times: "You're working hard to put food on your family." Remember that one? Of course, as it's a classic.

"Peeance Freeance" is sung acappella, with finger snaps. What's really wonderful about this track is that the singers sing all of the "uh"s in Bush's speech, and with joy and exuberance in their voices. The main line of this track is, "A peeance freeance secure Iraq in the midst of the Middle East will have enormous historical impact."

The next song, "4,000 Hours" has an old-timey feel, with the sound of a crackling LP. George W. Bush refers to his State Of The Union address, or "whatever you want to call it." He says, "I asked Americans to give 4,000 years - 4,000 hours - over the next of the rest of your life of service to America. That's what I asked. I said two - 4,000 hours." What wonderful gibberish. How many mistakes can one idiot make in a single sentence?

"She's An Unsticker" begins with a long chunk of his speech about the national security advisor. Then the song kicks in, with a mellow Hawaiian sound. According to Bush, her job is "to help unstick things that may get stuck. That's the best way to put it. She's an unsticker. And - is she listening? Okay, well, she's doing a fine job." Indeed.

In "Commiserate, Not Commiserate," George uses "commiserate" as a noun, and with a definition completely removed from that of the verb. And when he stutters, the singers do too. This song features a kazoo, the perfect instrument for Bush. It's an instrument one could actually imagine him playing (though not well, of course).

"In Tennessee" is a song of one of George's most famous quotes. "There's an old saying in Tennessee - I know it's in Texas, probably in Tennessee - that says, 'Fool me once, shame on, shame on you - you fool me - you can't get fooled again.'" This one is sung acappella with a gospel energy and a great deep voice.


Singers And Musicians On The CD

The musicians on this album are Brad Avenson on trumpet; Stewart Cochran on clavinet and piano; David Gratz on tenor saxophone; Jay Maui on guitar, steel guitar and dobro; Steve McAllister on bass and Optigan; Craig Robinson on organ and electric piano; and Kyle Schneider on drums.

The CD cover art has a warning, poking fun at the parental advisory stickers. This one says, "Grammatical Advisory: Exact Quotes." In the liner notes, George W. Bush is thanked "for his continuing inspiration." It's a shame that the liner notes don't include the original sources - the dates and locations of his actual speeches. But that's the only drawback of this wonderful album.
Songs In The Key Of W was released in 2004 through True Believer Records.
Posted by Michael Doherty at 2:01 PM