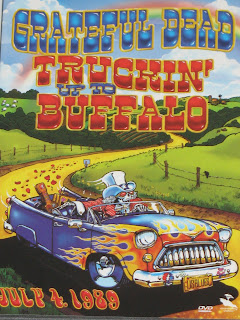 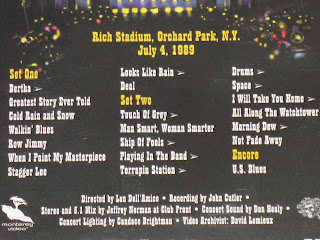 The Grateful Dead's Truckin' Up To Buffalo features the entire show the band performed on the 4th of July in 1989 at Rich Stadium.

In 2005, Truckin' Up To Buffalo was released on DVD. This DVD features the entire show that the Grateful Dead performed on July 4th, 1989 at Rich Stadium in Orchard Park, New York. (Orchard Park is right next to Buffalo; thus, the title, which of course is a lyric from "Truckin'.") The sound is excellent on this DVD. But for anyone having trouble understanding the lyrics, hitting the "subtitles" button on the DVD player brings up the song lyrics.

The DVD starts with the band already on stage, tuning up for the first set. There is a shot of Phil making a face just before Jerry starts in with the guitar lick from "Bertha." Jerry Garcia is wearing his customary black T-shirt; Bob Weir is wearing shorts and a pink T-shirt. There is great energy to start the show. There is a nice close-up of Jerry's guitar and a great shot of Jerry smiling at drummers Bill Kreutzmann and Mickey Hart.

There is an intensity to Jerry and Brent's vocals on the verse that starts, "Test me, test me, why don't you arrest me." At the end of the song, there is a wide shot which includes the beautiful tapestries surrounding the stage. And heck, that's all in just the first song.

The energy continues with "Greatest Story Ever Told," especially Bob Weir, whose vocals are on fire. And at the end of this song, there is a much better shot of the tapestries. These were designed for that summer tour by Czech artist Jan Sawka, and depicted the sun over the course of a day from sunrise to sunset.

The band then goes into the crowd-pleasing "Cold Rain And Snow," with Jerry singing, "I married me a wife/She's been trouble all my life."

At the beginning of "Row Jimmy" there is a shot of a banner some people in the audience were holding. It says, "What a long strange trip it's been. Happy birthday, Jillie." There is also a United States flag visible, which isn't surprising, as it was the 4th of July. This is a very pretty version of "Row Jimmy."

There is a wonderful moment just before "Stagger Lee" when Brent notices the camera right next to him and makes a face directly into it. He then says something to the camera man, but whatever he says in inaudible.

After a pretty good version of "Deal," Bobby says, "We'll be back in just a little bit." And the screen goes black for a few seconds to signify the set break. And then it's straight into set two.

There is an excellent moment at the beginning of the second set when Jerry and Brent are scratching their heads, smiling at each other. Jerry then scratches his grey beard and the band launches into "Touch Of Grey." (Jerry signaled the song first by touching his grey hair.) This song was their only true smash hit, and it's a great song, and this is a fun version. "We will get by, we will survive," they sing, and Jerry raises his fist in the air, happily, defiantly.

From there, they go into another fun, vibrant tune: "Man Smart, Woman Smarter." Brent takes the second verse: "Little boy sit on the corner and cry/Big man come and he ask him why/Says I can't do what the big boys do/The man sat down and he cried too." Near the end of "Man Smart, Woman Smarter," Bob, Jerry and Brent each take a separate vocal part, and the blend and play are excellent.

"Playing In The Band" is not the full song; it's the reprise. The main part of the song was performed at the previous show, July 2nd, in Massachusetts. (The band actually started that show with "Playing In The Band," something rarely done.) Very quickly "Playing" leads into "Terrapin Station," one of the band's best songs. And this is an excellent version.

Then most of the band leaves the stage, and the drummers take over. Mickey Hart is quick to grab the talking drum, and there are some nice close-ups of him playing it. Partway into "Drums" some digital effects are added to the picture - tracers, really, at least at first, with various colors. Then there are some mirror images. (Keep in mind that a lot of folks timed their trips to peak during the "Drums/Space" segment of the show.) "Space" has more strange imagery, like the instrumentals are caught in a kaleidoscope.

"Space" leads into Brent Mydland's pretty "I Will Take You Home," a song he wrote for his daughter. The second set also includes a truly moving and powerful rendition of "Morning Dew."

Grateful Dead Concert DVDs
The Grateful Dead have released several concerts on DVD over the years. The very next show, July 7th, was released both on DVD and CD this year under the title, Crimson, White & Indigo. Here's hoping that the previous show, July 2nd, will be released sometime soon.

Truckin' Up To Buffalo was directed by Len Dell'Amico.
Posted by Michael Doherty at 3:56 PM