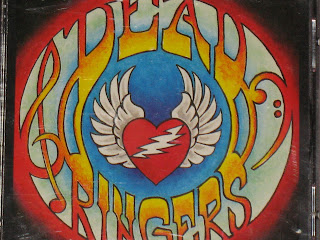 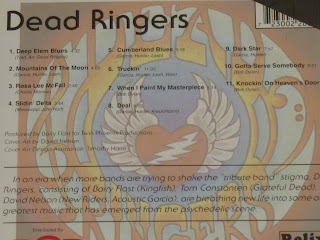 While there have been many Grateful Dead cover bands over the years, the Dead Ringers certainly stand out, as the members of this band have the honor of having actually played with the Grateful Dead.

Tom Constanten, in fact, is one of only two surviving keyboardists from the band (the other being Bruce Hornsby). He played with the Grateful Dead in 1968-1970, appearing on the band's two most psychedelic albums, Anthem Of The Sun and Aoxomoxoa.

David Nelson played with Jerry Garcia in New Riders Of The Purple Sage as well as The Jerry Garcia Acoustic Band. He also appeared on Grateful Dead records like Workingman's Dead and American Beauty, and sat in with the band a few times.

And Barry Flast played in Kingfish, and again later with Bob Weir.

These are live recordings from various concerts the Dead Ringers performed in 1992 and 1993.

The album begins with "Deep Elem Blues," a song the Grateful Dead performed mostly in 1970 and 1980, when they had added acoustic sets to start their concerts. It's a traditional folk song, and the Dead Ringers do an excellent job with it. It benefits from the presence of Brian Godchaux on fiddle. (Brian is Grateful Dead keyboardist Keith Godchaux's brother.)

"Mountains Of The Moon"

"Mountains Of The Moon" is a strange, trippy tune from the Grateful Dead's 1969 release, Aoxomoxoa. Written by Jerry Garcia, Robert Hunter and Phil Lesh, this is a song the Grateful Dead did not perform all that much. The Dead Ringers do not emphasize the psychedelic elements of the song, but rather give it the feel of a country ballad. And it works really well.

"Slidin' Delta" is the only song on this album that wasn't performed by the Grateful Dead. It was written by Mississippi John Hurt. It's a great old blues song, done here with a sweet and quiet folk bent.

One of the real highlights of this release is the Dead Ringers' version of "Cumberland Blues," a song originally included on the Grateful Dead's Workingman's Dead (1970). The band is clearly having a lot of fun on this one, as is the crowd at the Colorado venue where this was recorded. The energy on this recording is remarkable, and their voices sound perfect, blending well together.

On "Truckin'" the Dead Ringers start to stretch out. All of the previous tracks were fairly short, but the band jams on this song, and in fact it's the longest track on this CD. The line "What a long, strange trip it's been" still brings a smile to Dead fans. "Truckin'" was originally included on what is possibly the best Grateful Dead record, American Beauty (1970).

One song guaranteed to always excited Grateful Dead fans is "Dark Star." This is a strange version, with the vocal line performed on piano to start the song. It's actually beautiful. Tom Constanten really shines on this song. And that should come as no surprise, because this song comes from the time when he was playing with the Grateful Dead, a time when the band was at its most experimental.

This version will not disappoint. It definitely goes off into "Space" territory, which is great. This version, recorded at the great (and now defunct) La Luna in Portland, actually doesn't have any vocals.

"Dark Star" was written by Jerry Garcia and Robert Hunter.

Dead Ringers include three songs written by Bob Dylan, an artist that the Grateful Dead often covered, particularly in the later years. In 1987, Bob Dylan did a short series of concerts with the Grateful Dead, where the Grateful Dead acted as his band and so learned a good deal of his material. They also released an album together, Dylan & The Dead (1989). After those concerts, the Grateful Dead continued to perform many of those songs in their concerts.

The first of these three songs, "When I Paint My Masterpiece," was a song that Bob Weir sang lead on during Grateful Dead performances. This version by the Dead Ringers includes some added lyrics, like, "Sailing around the world/In a dirty gondola/Oh, to be back in the land of Coca-Cola."

"Knockin' On Heaven's Door," the third Dylan song and final track on this CD, was a song the Grateful Dead often did as an encore in the later years. This version was recorded at The Oregon County Fair In Veneta in July of 1992 (making it the earliest track on the album). The song was dedicated to Bill Graham, who had died the previous October. And it's a sweet version, including a nice saxophone solo. The audience is audible singing along at the end.

"Gotta Serve Somebody" and "Knockin' On Heaven's Door" were included on Dylan & The Dead.

Musicians supporting them on this release include Fred Campbell on vocals, bass and acoustic guitar; Barry Sless on guitar and pedal steel; and Arthur Steinhorn on drums.

Dead Ringers was released in 1993 through Relix Records.
Posted by Michael Doherty at 2:42 PM