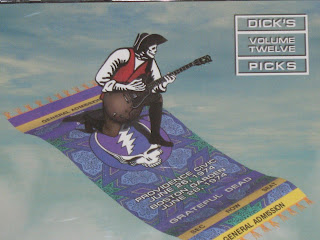 The first disc contains most of the second set that the Grateful Dead performed at Providence Civic Center in Providence, Rhode Island on June 26, 1974.

It starts with a mellow jam led by the guitars and bass, with bits of piano. There are almost no drums in this jam. That leads to a wonderful version of "China Cat Sunflower." It's a prime example of how Phil Lesh played his bass like another lead guitar. The bass is just excellent. Bill Kreutzmann's drumming is particularly good too. Jerry Garcia's vocals sound a bit strange. That was par for the course in 1974. Something about the Wall Of Sound speaker system made the vocals often sound a bit odd.

On the liner notes, the third track is listed as "Mind Left Body Jam," but on the back of the CD it's listed as "Mud Love Buddy Jam." But as it goes right into "China Cat Sunflower," tapers didn't list this as a separate song at all. And what it really sounds like is an "Uncle John's Band Jam." Well, regardless of what it's called, it leads into a nice version of "China Cat Sunflower."

After that, the band does a little bit of the "Beer Barrel Polka." Yes, roll out the barrel, but it's an instrumental version - no lyrics. The Dead were clearly in a good, goofy mood.

They next played a nice, big, monstrous version of "Truckin'" with a great jam. That led into just a moment of "The Other One," and then into an excellent "Spanish Jam." This jam also has hints of "The Other One" a little way into it. This jam gets odd and spacey.

The first disc ends with good versions of "Wharf Rat" and "Sugar Magnolia."

Second Disc Starts With "Eyes Of The World"

The second disc starts with the encore from June 26, 1974. And that encore is an incredible version of "Eyes Of The World." Everything sounds perfect and clear. This is such a beautiful song. The jam is phenomenal, with Phil's bass once again taking another lead position. There is a section of the jam that is excellent, which they later stopped playing. But the version here is complete, and Bill's loose jazzy drum rolls during that part are incredible. Oddly, this version ends right after that section.

"Seastones" is a strange instrumental improvisational piece that Phil Lesh and Ned Lagin performed between the first and second sets. On audience tapes it's generally referred to as "Phil & Ned." But they did release an album titled "Seastones," which is why it's labeled as such on this CD.

The piece is mostly feedback and odd sounds. It's not melodic at all. It is similar to the "Space" section of later concerts. It's only four and a half minutes long.

The second disc has another version of "Sugar Magnolia." Yes, they played it at two consecutive shows. But this version is different from that played on the 26th. This time they don't go right into the "Sunshine Daydream" section of the song, but rather go right into "Scarlet Begonias." "Scarlet Begonias" is a bit messy at the start, but the song was still relatively new. At this point, they were still singing, "Once in a while you can show 'em the light" rather than the later "Once in a while you can get shown the light." The jam is really nice.

The second disc also contains really pretty versions of "To Lay Me Down" and "Row Jimmy."

The third disc opens with "Weather Report Suite," a song that wasn't done all that much in its entirety. Later, only the third section, titled "Let It Grow," was performed in concert. But here is the full song, and it's a wonderful version. The jam is great.

Oddly, the second track is "Mind Left Body Jam," at least at the beginning, but it isn't labeled as such. This jam also contains hints of "Dark Star." This jam gets crazy and wonderful. It's almost twenty-eight minutes long.

The third disc ends with the encore, a beautiful rendition of "Ship Of Fools." There is actually also some funny stage banter before the band launches into the song.


The "Dick's Picks" series was started in 1993 by official tape archivist Dick Latvala. Dick's Picks Volume Thirteen contains the entire concert from May 6, 1981. There were thirty-six volumes in all, released from 1993 through 2005. In more recent years, a new series of live recordings titled "Road Trips" has taken its place.
Posted by Michael Doherty at 12:50 PM