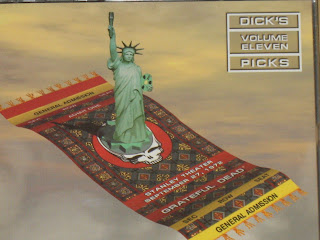 This three-disc CD contains the entire concert the Grateful Dead performed on September 27, 1972.

Dick's Picks Volume Eleven is a recording of the concert the Grateful Dead performed at Stanley Theater in Jersey City on September 27, 1972.

Though this CD contains some great jams (particularly during "Playing In The Band") one will notice there are very few arrows on the track list. In fact, only two. While normally the Grateful Dead would go from one song right into another (as indicated by the arrows), at this show they stopped between songs. While that would seem to imply a lack of flow, a lack of momentum, that is not the case.

The song is a post-apocalyptic view, showing the despair of the few possible survivors. Jerry's voice always seemed at his most powerful and effective on songs like this one and "Stella Blue" and "Wharf Rat," the songs that require a lot of emotion.

The first disc contains a great "Black-Throated Wind," a song that originally appeared on Bob Weir's "solo" album, Ace, which came out earlier that year. The band stopped playing this song in 1974, and fans were thrilled when the song returned to set lists in 1990.

The version on this disc is a great early rendition, with Bob belting out lines like, "You've done better by me than I've done by you."

"Bird Song" features a nice, sweet jam. This is a good version of the song, through Jerry Garcia's vocals seem strained at times.

The Grateful Dead do an excellent version of the beautiful "Brokedown Palace," originally included on what many consider to be the Dead's best studio album, American Beauty (1970). The vocals sound gorgeous on this rendition (until the very end, that is). This song is definitely a highlight of this CD.

"China Cat Sunflower" Into "I Know You Rider"

The second disc begins with "China Cat Sunflower." There are some strange notes at the beginning of the song. The first seems a mistake, but it's repeated. Who knows? It doesn't seem to affect the band adversely, for the song's jam section is really good.

The Grateful Dead ended the first set that night with "Playing In The Band," another song featured on 1972's Ace. This is a song the band often stretched out on, and the version included here is sixteen minutes.

And this was during the 1970s, and so Donna Jean Godchaux is present on backing vocals. She really added a lot to the song, and most of the best versions of this song were during her time with the band. The band wastes almost no time before diving into one of the best jams of the night, and of this 3-disc set.

The second set that night began with "He's Gone." Though there were some sound difficulties right after the line, "Nothing left to do but smile, smile, smile," this is an excellent version of the song. The play between the guitars and the piano is wonderful toward the end of the song.

Written after Micky Hart's father, working as the band's manager, embezzled money from the band, "He's Gone" subsequently went through many changes as to its theme. At first a somewhat angry song, after the death of keyboardist Ron "Pigpen" McKernan (and then Keith Godchaux and Brent Mydland), it would become much more melancholy, even working as a tribute to the fallen bandmates.

The second disc ends with a seriously cool and playful rendition of "Ramble On Rose." Jerry's giving it his all, and the results are phenomenal.

The presence of "Dark Star" on a live album always gives Grateful Dead fans cause to rejoice. And the version that kicks off the third disc will not disappoint. It's a half hour in length, so there is plenty of jamming. And while it's not as trippy as a "Dark Star" from, say, 1969, it's still quite loose and exploratory. And about ten minutes in, the band stumbles upon a really cool rhythm, and sticks with it for a while.

Things get a little stranger when Phil Lesh takes over around the seventeen minute mark. And when the listener has all but forgotten that the song even has lyrics, twenty-four minutes in, Jerry begins singing. Only one verse, and then it's on into a fast and fantastic "Cumberland Blues."

"Attics Of My Life"

"Attics Of My Life" is one of the sweetest, most beautiful songs the Grateful Dead ever wrote. Originally included on American Beauty (1970), this song was played in the years 1970 through 1972, and then not again until 1989. Powered mostly by the vocals (and some of Robert Hunter's best lyrics), the version included here includes some nice work by keyboardist Keith Godchaux.

Here is a taste of the lyrics: "In the attics of my life, full of cloudy dreams unreal/Full of tastes no tongue can know, and lights no eyes can see/When there was no ear to hear, you sang to me."

The third disc also includes wonderful versions of "Uncle John's Band" (after which Keith Godchaux fools around a bit on piano) and "Casey Jones." There also are romping versions of two Chuck Berry songs, "Promised Land" and "Around And Around," the latter being the night's encore.


The Grateful Dead at the time of this recording were Jerry Garcia on vocals and lead guitar, Bob Weir on vocals and rhythm guitar, Phil Lesh on bass and vocals, Bill Kreutzmann on drums, Keith Godchaux on keyboards, and Donna Jean Godchaux on vocals.