History Of The Grateful Dead - The 1980s 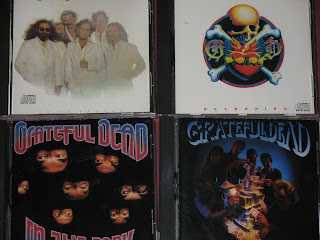 During this decade, the Grateful Dead had their only top ten hit. The decade was also marked by Jerry Garcia's collapse into a coma.

The 1980s began with the release of Go To Heaven, the first album to feature the band's new keyboardist, Brent Mydland (who had joined the band the previous April). This album included two songs that he wrote: "Far From Me" and "Easy To Love You." There would not be another studio album until 1987's In The Dark.

Also in 1980, the Grateful Dead did a long series of shows in which they did an acoustic set - something they hadn't done since 1970. These shows were held at the Warfield Theater in San Francisco and Radio City Music Hall in New York (there were also two shows in New Orleans in between those).

Though from 1982 through 1986, no new albums were released, the band was introducing plenty of new material to their concert performances.

In 1984, the band introduced the Tapers Section, a special area of each venue where those who wished to record the show would sit. The first show with a Tapers Section was October 27, 1984. Of course, fans had been recording the band's concerts almost since its inception. But now they were organized into one section, usually right behind the soundboard. This kept microphone stands from popping up all over the venues and obstructing other fans' view of the stage.

Jerry Garcia Collapses Into A Coma
In 1986, Jerry Garcia went into a diabetic coma. When he came out of it five days later, he had to relearn how to play guitar, as well as having to relearn other, more basic, skills. There were no shows from July 8th through December 14th. But he did recover fairly quickly, and the Grateful Dead were back to performing in mid-December. The first song he played when the band returned to the road was "Touch Of Grey."

Of course, 1987 was a huge year for the Grateful Dead. It saw the release of In The Dark, the band's first studio album in seven years. That album actually went to #6 on the charts. And "Touch Of Grey" was the band's first real hit, reaching #9 on the Billboard 100 (it also reached #1 on Billboard's Mainstream Rock chart).

This was a blessing and a curse for the band, as suddenly there were many more people who wanted to see the band perform live. And the band would be forced in the coming years to play larger venues.

In 1988 they played certain venues for the last time, as the band was banned from such places as the Saratoga Performing Arts Center. This was mostly because of the hassle these communities suffered with so many people coming through.

In the summer of 1987, the Grateful Dead and Bob Dylan did a number of shows together. The Grateful Dead did its regular show, and then there would be another full set with the band backing Bob Dylan. A live album of songs from this tour was released in early 1989.

"Built To Last" - Final Studio Release
On Halloween of 1989 the band released its final studio album, Built To Last. It did not do nearly as well as In The Dark, and contained no hit songs. That was just as well, as there were so many fans trying to get tickets to the concerts already.

The Decade Ends
On December 31st, 1989, the Grateful Dead did their usual New Year's Eve concert at the Oakland Coliseum. Bill Graham dressed as a chicken and landed on a giant egg. (Each New Year's concert, he would dress up and arrive riding on some giant prop piece.) The final encore that night was "In The Midnight Hour."