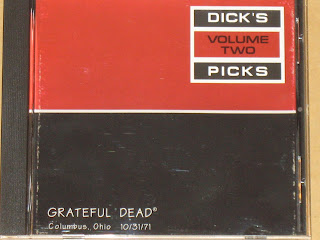 This CD contains the entire second set from the Halloween show, 1971, and features a nice long "Dark Star."

This CD is the second in the Dick's Picks series. It contains only a single disc. The music is from the concert the Grateful Dead performed on Halloween of 1971 at the Ohio Theatre in Columbus, Ohio. This CD contains the entire second set. (It has nothing from the first set, and it does not have the encore.)

The album opens with a great version of "Dark Star." This was in the days of the long, spacey "Dark Star." The version on this release is just over twenty-three minutes long. This was a song the Dead used as a platform from which to jump off into all sorts of musical realms.

Also, this was during that period when the Dead had just one drummer, Bill Kreutzmann. Mickey Hart had left after his father was caught embezzling money from the band. (He would return in late 1974.) Bill Kreutzmann was a jazz drummer, and so the music at this time was looser.

The jam out of "Dark Star" is interesting. About fourteen minutes in, it gets a very pop-like groove going, something unexpected when in "Dark Star" territory.

"Sugar Magnolia" was still relatively new at this point. This was before "Sunshine Daydream" was separated from the song. This version has a lot of energy.

Ah, the ever-popular "St. Stephen." What can be said about this song? It's great. The final live performance of this song would also be on Halloween, twelve years later.

"Not Fade Away"/"Going Down The Road Feeling Bad"

"Not Fade Away" and "Going Down The Road Feeling Bad" were often paired at this time. Both songs are covers. "Not Fade Away" was written by Buddy Holly (Charles Hardin Holley) and Norman Petty, and originally recorded by The Crickets.

"Going Down The Road Feeling Bad" was most likely written by Woody Guthrie (though on this CD, it's listed as "traditional"). That song was featured in the film version of The Grapes Of Wrath.

In later years, "Not Fade Away" was often paired with "Throwing Stones."

Keyboardist Ron "Pigpen" McKernan was still alive at this time, and still performing with the band, but not regularly, due to health issues. (He had played with the band in August, but wouldn't play with them again until December of 1971.) Keith Godchaux had joined the band just a couple of weeks before this show. And this was before Donna Jean Godchaux joined the band on backing vocals.

The track list for Grateful Dead's "Dick Picks Volume Two" is as follows:

Posted by Michael Doherty at 3:45 PM