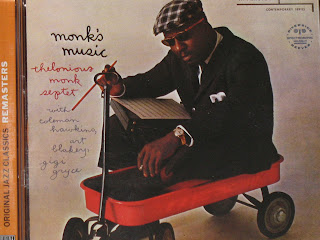 Monk's Music is one of Thelonious Monk's most famous and wonderful albums. Originally released in 1957, this re-issue contains three bonus tracks (that's more than twenty-three minutes of extra material).

The album opens with "Abide With Me," a short (under a minute) traditional hymn. Written in the 19th century, this songs works as a prayer or commencement address for the album. It features the four horns, and no piano, bass or drums.

The album then kicks in with the fun, playful, bright "Well, You Needn't." It's not far into the song before Thelonious Monk takes the lead on piano, with Wilbur Ware and Art Blakey backing him on bass and drums respectively. The horns come back in, each taking a turn at lead - including John Coltrane on tenor sax. Five minutes in, the other musicians leave the song to Ware and Blakey, and soon just to Blakey. His is an interesting solo, with the high-hat keeping steady time even through several rolls.

Written by Monk, "Well, You Needn't" is played with joy and insane talent. Just check out this lineup: Thelonious Monk on piano, Ray Copeland on trumpet, Gigi Gryce on alto saxophone, John Coltrane on tenor saxophone, Coleman Hawkins on tenor saxophone, Wilbur Ware on bass and Art Blakey on drums.

This is followed by the mellow, romantic "Ruby, My Dear," a beautiful love letter to melt the coldest of hearts. This song, though written by Monk, belongs to Coleman Hawkins. His horn is the piece's voice and soul. It's more than four minutes before Hawkins takes a brief pause for Monk to solo.

Thelonious Monk really shines on "Off Minor," producing some great stuff on piano. He then slowly fades to let Ware and Blakey take over, before everyone returns. The song features a strange and interesting ending.

A different take of "Off Minor" is included in the bonus tracks.

"Well, You Needn't" was side one's extended tune. "Epistrophy," written by Thelonious Monk and Kenny Clarke, is side two's longer track. This song features fantastic solos by Coltrane, Copeland, Gryce, Ware, Blakey, Hawkins and then - finally - Monk. I absolutely love Blakey's drumming on this track - he provides some interesting and delightful fills under the others' solos. And his extended solo is phenomenal. A horn comes in a bit early, but Blakey isn't done - it's actually a great little moment.

The original album concluded with "Crepuscule With Nellie," a song that is basically all Monk. It's an excellent piano tune written by Monk. Horns come in halfway through, adding a brighter element for Monk to play under. There is something glorious and gorgeous in this song's seeming simplicity.

In the bonus tracks is included another version of this song - actually sections from two different takes spliced together.

The CD ends with "Blues For Tomorrow." It's the longest track on the CD, and one that actually does not feature Monk. Written by Gigi Gryce, this piece features some fantastic work from the horn players.


Monk's Music is scheduled to be released on March 15, 2011 by Concord Music Group as part of its Original Jazz Classics Remasters series. In addition to Monk's Music, three other titles will be released that day: Art Blakey's Jazz Messengers: Ugetsu; Ella Fitzgerald and Oscar Peterson: Ella And Oscar; and Cal Tjader Stan Getz: Sextet.
Posted by Michael Doherty at 6:06 PM