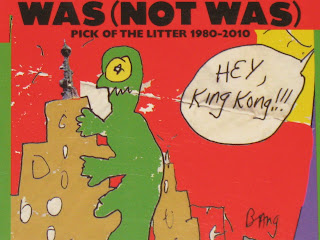 Was (Not Was) is one of the most interesting bands. This greatest hits compilation includes not only those fun dance songs from the 1980s, but great recent material.

Was (Not Was) was formed in 1980 by Don Was (Don Fagenson) and David Was (David Weiss). They assembled an incredible group of musicians for their project. This CD is a greatest hits compilation, and it's excellent. It's full of the funk, the fun, the wacky lyrics, the great horns, the dance beats and even the spoken words that make Was (Not Was) one of the most interesting, innovative and original bands in music history.

This is not one of those bands whose heyday is long since past. Some of the more recent songs are among the best material on this album (such as "Semi-Interesting Week" from the 2008 release "Boo!").

The album starts with "Wheel Me Out," which has a simple disco beat with an awesome horn and strange, fun lyrics. The lyrics include, "I'm the former scientist, now on wheels/Then I was discouraged by you." This song is pure fun, and should still be played at the clubs. Make your own dance floor, and turn this song up. (This song also features a cameo by Liz Weiss, David's mom.)

There is more dance music with the second track. "Out Come The Freaks," indeed. The version included on this album is the 7" version.

"The Sky's Ablaze" is a spoken word, beat-type poetry piece, with horn. It also has the sound of traffic (and so another kind of horn). Check out these lyrics: "My father used to take a drink or two when I was young/It was then hallucinations always dangled from his tongue/The sky's ablaze with ladies' legs, he used to say/They're kicking from the clouds/Shoes fall through the morning haze and splat like eggs amongst the crowds."

"Spy In The House Of Love"

"Dad I'm In Jail" Was Used In Pump Up The Volume

"Dad I'm In Jail" was featured in the film Pump Up The Volume, but conspicuously absent from the film's soundtrack album. This is a great little freaky song. "Say hi to Mom from jail."

Listen to "Spy In The House Of Love" and then "Dad I'm In Jail." Those come from the same album. They don't even sound like the same band. Wild.

"Papa Was A Rollin' Stone" is the only cover song included on this CD. This version totally honors the original, and builds from it. It's just so damned cool.

"I Feel Better Than James Brown"

"I Feel Better Than James Brown" is a strange song. Its cool spoken word part makes it seriously enjoyable (and slightly similar to "Dad I'm In Jail"). These lyrics are wonderful. Here is a taste: "When we were in love I pretended you didn't exist/That way I loved you more/You suggested we get married and move into a house/I suggested that we jump overboard/And live underwater in the lost city of Atlantis/Where mermaids sing/And tuxedoed dolphins bring you breakfast." How wonderful is that? Seriously.

"I Blew Up The United States"

A lot of people forget that Don and David Was actually did blow up the United States. But then Ronald Reagan's corpse (even though he wasn't dead yet) was able to quickly piece it together again. But here are some of the lyrics to the song: "It's a free country/I'm within my rights/Every child should have a weapon/And a ton of dynamite." Second Amendment be praised!

"Semi-Interesting Week" is just a seriously cool tune, one of the best in this collection (possibly the very best, actually). The lyrics are twisted and wonderful, and even poke fun at Scientology. Here they are: "When a big silver saucer/With a green flashing light/ Landed on the Hollywood sign/ I thought it might be the second coming/Or maybe just some special effects/When in walked Father Hubbard /With his boy Tom Cruise/Reeking of some science fiction sex."

"Hello Operator...I Mean Dad...I Mean Police...I Can't Even Remember Who I Am" is one fun song. This is a previously unissued track.

"Shake Your Head" is techno dance song that features a duet with Ozzy Osborne and Kim Basinger. Really. It's excellent, a precursor to In-grid and a lot of other techno and dance music.

Leonard Cohen performs lead vocals on "Elvis' Rolls Royce." To put this into the Leonard Cohen timeline, this recording came two years after I'm Your Man and two years before The Future. It came out the same year that both Leonard Cohen and Was (Not Was) were featured in the film Pump Up The Volume, and yet neither made it onto the soundtrack. Leonard Cohen's voice works so well with Was (Not Was).

David Was And Don Was

(Note: I originally posted this review on March 25, 2010 on another site that has since been taken over by rabid, foul beasts.)
Posted by Michael Doherty at 7:40 PM