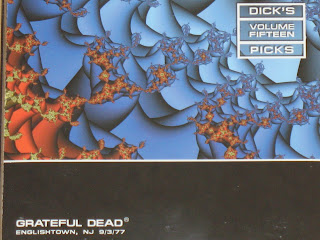 This is the fifteenth in the "Dick's Picks" series, named after Grateful Dead tape archivist Dick Latvala. This was the first CD in the series to be released after Dick's death (he died after a heart attack at the age of 56), and the liner notes contain a note written from the Great Beyond. Well, the recently deceased sure picked a good show to release: this is another show from that peak year, 1977.

The first CD starts with the band being introduced. Then the band goes into Chuck Berry's "Promised Land." There is a bit of trouble remembering some of the lyrics, but then when they get it right, they actually say, "That's right," which is great.

They then do a really nice version of "They Love Each Other." The first disc also contains a good "Mississippi Half-Step Uptown Toodeloo," which has some great jamming, and a pretty "Looks Like Rain," as well as a sweet "Peggy-O."

The first CD has the entire first set.

The second disc opens with a fun "Bertha." So what if there was some trouble with remembering which verse they were on? That's all part of the concert experience, especially with a band that had so much material to choose from.

From "Bertha," they go right into an energetic (though very short by Dead standards) "Good Lovin.'"

There is quite a bit of fun stage banter, which the Dead all but stopped in later years.

"Estimated Prophet" Into "Eyes Of The World"

The second set features a really cool "Estimated Prophet" which of clourse slides into the always appreciated "Eyes Of The World." This pairing of "Estimated"/"Eyes" was done a lot throughout the band's career, but these songs provided the band with a good solid groove from which they could deviate into some interesting musical territory. Some fun, solid jamming. Plus, "Eyes" has a good positive feel to it that always brings a smile to the audience.

Grateful Dead Band Members
The band at the time of this recording was Jerry Garcia on vocals and guitar, Bob Weir on vocals and rhythm guitar, Phil Lesh on bass and vocals, Bill Kreutzmann on drums, Mickey Hart on drums, Keith Godchaux on keyboards and Donna Jean Godchaux on vocals.

The following is the track list for Grateful Dead's Dick's Picks Volume Fifteen: