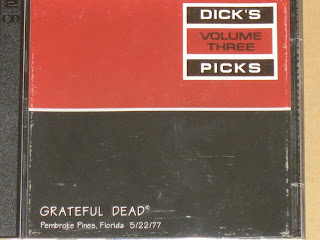 Two-disc CD contains a lot of the show the Grateful Dead performed on 5/22/77 at the Sportatorium in Pembroke Pines, Florida.

After 1973, 1977 was probably the best year for Grateful Dead concert performances. And this recording stands as a testament to that. This is a great show, a great recording. The band has so much energy. And there is something so clean and perfect about recordings from 1977. Every instrument, every note is so clear.

The first CD starts with just a wee bit of "Funiculi Funicula," and then the band launches into a fun version of "The Music Never Stopped." "Sugaree" is really good too.

The CD then skips several songs from the first set of that night and goes right to "Lazy Lightning." "Lazy Lightning" into "Supplication" was fairly common around that time. But these are good versions.

"Dancin' In The Streets"

The first set that night ended with a really fun, grooving version of "Dancin' In The Streets." This was a song that the Grateful Dead did in their early days, and then revived in a very different style in the late 1970s. This version is nearly fifteen minutes long.

The first CD ends where the second set begins. That is, with a cool version of "Help On The Way" into "Slipknot!" into "Franklin's Tower." And this was back when the band was still saying "Diga" at the end of the lyrics to "Help On The Way." "If you get confused, listen to the music play." Indeed.

The second CD starts with "Samson And Delilah," which was the song the Dead played right after "Franklin's Tower." The rest of the second CD is the end of the second set (it skips "Brown-Eyed Women" and "Good Lovin'," and doesn't include the encore, which was "Sugar Magnolia").

"Sunrise" is a song that Donna Jean Godchaux wrote and sang lead vocals on. It appears on the band's 1977 release, "Terrapin Station." The Grateful Dead only performed this song in concert in 1977 and 1978.

"Estimated Prophet" is also from "Terrapin Station" (which was released two months after this concert). The version on this CD is excellent, and it leads into "Eyes Of The World." This pairing was done by the band many, many times over the years, but it was always welcomed by fans.

The jam out of "Eyes Of The World" is pretty, and it leads to a great, powerful version of "Wharf Rat." Ah, when Jerry sings, "I'll get up and fly away," who can help but be moved?

"Wharf Rat" moves into a short version of "Terrapin Station." The entire first section of the song, known as "Lady With A Fan," was not performed. This version starts with Jerry singing, "Inspiration." It's a great and interesting version.

The second disc ends with the always poignant "Morning Dew." Keith Godchaux's gentle piano playing works so beautifully with Jerry's guitar in the latter part of the song. This is a great version of this song.

This is the third in the series of releases called "Dick's Picks," named after Dick Latvala, the tape archivist. It was released in 1995.

The track listing for Grateful Dead's Dick's Picks Volume Three is as follows:

Posted by Michael Doherty at 3:49 PM