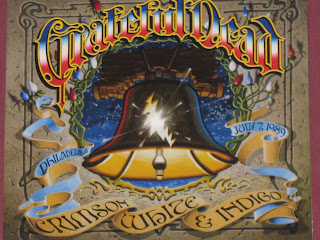 DVD of the complete concert the Grateful Dead performed on July 7, 1989 is included with the CDs. There is some excellent footage, including many close-ups.

Back in the 1980s and the first half of the 1990s, thousands of people would pack their cars, vans and buses and head off to see the Grateful Dead each summer. The folks who did this in the summer of 1989 were in for a lot of good times. This DVD captures one concert on that tour: July 7, 1989 at JFK Stadium in Philadelphia.

This was an outdoor stadium, and when the band took the stage, it was still daylight. There is a great shot of the audience as the band starts "Iko Iko." In the first few notes, the audience recognizes the song, and responds with enthusiasm. The band rarely played that song so early in a show, and this DVD captures the audience's sudden understanding that this was going to be one of those magical nights.

July 7, 1989 was clearly a hot day. Just look at the sweat dripping down Jerry Garcia's face early in the first set. It's really apparent in watching this DVD how much Jerry Garcia was feeding off of Brent Mydland's energy that night.

In the wide shots, the beautiful tapestries hanging on the top and sides of the stage are visible. These were designed for that summer tour by Czech artist Jan Sawka, and depicted the sun over the course of a day from sunrise to sunset.

Visible on this DVD are the photographs of Brent Mydland's children, which are on one of his keyboards. It's heartbreaking to think that just one year later, Brent would be dead.

One of the highlights of the show is the first set closer, Brent Mydland's "Blow Away." Partway through the song, he begins vocally riffing to the audience about love. About holding love tight in your fist, near your chest, as if wanting to shove it straight into your heart to hold it in. He says, "That ain't real love. Do you want to know real love?" The crowd cheers.

By the time the band took the stage for the second set, it was completely dark, and so this is when the great lighting design by Candace Brightman really comes into play.
The second set starts with "Box Of Rain," and there are some great close-up shots of Phil Lesh singing this song. There is also a really nice shot of Bob, Jerry and Brent adding their voices late in the song.

During "Scarlet Begonias," there are great shots of Mickey Hart and Bill Kreutzmann on the drums.

Some Sloppy Camera Work
There is some sloppy camera work approximately halfway through the second set. During "Estimated Prophet," there is a shot of Jerry Garcia that is completely out of focus. There are some other out-of-focus shots too, which is interesting considering how many cameras there were. Didn't someone have a better shot?

It's wonderful to be able to see Mickey Hart and Bill Kreutzmann during the "Drums" segment of the show. At concerts, it was difficult to see them because they're behind those large drum kits. There are some great shots, including extreme close-ups of Mickey's talking drum and of Mickey attacking those large toms that were set up behind the kits. There aren't as many shots of Bill, but there are still some good ones.

If memory serves, during "Space" that summer the video screens showed lots of psychedelic graphics, so it's entirely possible that one or two camera people were taking a break during this part of the show.

After "Space," there is an amazing shot of Phil Lesh launching into the monstrous bass line to "The Other One."

During "Turn On Your Lovelight," there is cool shot of Bob Weir pointing at the audience, indicating he wanted them to repeat what he was singing. A bit of call and response. There are also excellent shots of the other band members repeating, "Shine on me."

The DVD ends with the encore, which is Bob Dylan's "Knockin' On Heaven's Door." There are no special features on the DVD.

Cameras Were There For Live Video Screen Feed

Four cameras were on hand to capture the magic. Two were on cranes - one in the audience, and one on stage left. There was a dolly camera in front of the stage. And there was a cameraman going handheld who shot from both stage left and stage right. (Though only four camera operators were credited on this release, it seems that there is a fifth camera on stage right.) The cameras were there for the live screen video feed directed by long-time Grateful Dead collaborator Len Dell'Amico. This was because the summer venues were huge, and folks toward the back were unable to see much of the band.

This was the final rock concert ever to be held at JFK Stadium. It was torn down soon after this. (The first concert ever held there was The Beatles in 1966.)

This DVD is included in a four-disc package. The other three discs are CDs that contain this entire performance. Click here for a review of the Crimson, White & Indigo audio CDs.

Twenty-two movie theatres across the country held special screenings of this concert between April 13th and April 18th. It was a treat to see this concert on the big screen. The Grateful Dead also released the previous show, July 4, 1989, on DVD, titled Truckin' Up To Buffalo.