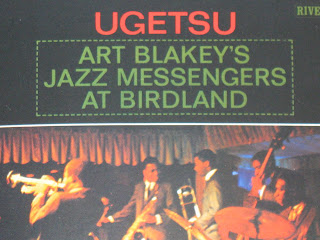 Ugetsu is a live album recorded at Birdland in New York City on June 16, 1963. This is one of the most joyous, high-energy recordings I've heard.

Art Blakey didn't compose the material. Most of it was written by his band members, including Wayne Shorter, Cedar Walton and Curtis Fuller. There are also some interesting covers.

This album was originally released in 1963. This new re-issue features four bonus tracks, including a short number written by Miles Davis, as well as an excellent cover of George Shearing's "Conception."

Birdland was of course named after Charlie Parker. It was established in 1950. For a live recording, there is not a lot of crowd noise on Ugetsu. It's an incredible-sounding, clear recording.

At the beginning of the first track, "One By One," the band is introduced. Then they waste no time getting right into the thick of things, with explosions and waves of beauty and energy. Turn the volume up on this one. It's pretty, sure, but it's also got such a great groove. This is a song that makes me wish I could travel back in time, learn how to dance - I mean, REALLY learn how to dance - and then cut loose at this club in New York.

The title track opens with Art explaining that "ugetsu" is a Japanese word meaning "fantasy." And what a fantasy. Fast-paced, upbeat, grooving - with some excellent work on horn, particularly by Freddie Hubbard on trumpet. Holy moly, some of those notes seem invented just for this song, and by his trumpet alone.

In the new liner notes written by Neil Tesser for this release, it says that "ugetsu" actually translates as "pale moon after the rain." With that in mind, it's easy to hear some of Cedar Walton's piano playing as rain - or even a short burst of storm that catches folks unaware but happy. The sort of storm you want to get caught in. This track is tremendous. Cedar Walton wrote this one.

Just try to keep up with the manic energy of "Time Off." It's like glorious mythic flying creatures on amphetamine - recorded in flight as they circled some prey. Cedar Walton's piano work is astonishing. And of course keeping the whole pulsing beast alive and moving is Art Blakey on drums. Just amazing. "Time Off" was written by Curtis Fuller.

"Ping-Pong"
Art Blakey starts the next track off. And this one - "Ping-Pong" - is another monster of a tune. Another bright fantastic groove, with some amazing work on drums. Art really lets loose on this uptempo track. A great jam.

The band then does a cover of the Richard Rodgers and Lorenz Hart song "I Didn't Know What Time It Was" from the musical Too Many Girls (1939). This track features Wayne Shorter on tenor saxophone. It's a mellow, slower tune, perhaps to let the band catch its breath. The band bursts in a little more than three minutes in.

"On The Ginza" begins with Art saying he sincerely hopes the audience enjoys the song. He explains that Ginza is a shopping area in Tokyo. And then Art says, "On this tune we feature no one in particular." That is, the song features all the musicians at the height of their powers. "On The Ginza" was written by Wayne Shorter. And that track concluded the original record.

This special re-issue contains four bonus tracks. The first is "Eva," a song on the mellow side, written by Wayne Shorter. "The High Priest," the second bonus track, features some wonderfully relentless horn. Written by Curtis Fuller, it features a cool, sly ending.

The bonus tracks also include a cover of George Shearing's 1949 tune "Conception." This track features some incredible work by bassist Reggie Workman, and a drum solo by Art Blakey. This track has never before been released on CD. There is a short, strange bass solo at the end.

The final track is "The Theme," written by Miles Davis. It begins with a wild drum solo by Art Blakey, and then fades out soon after the other musicians come in. This track is less than two minutes long.

The musicians features on this album are Art Blakey on drums, Curtis Fuller on trombone, Freddie Hubbard on trumpet, Wayne Shorter on tenor saxophone, Cedar Walton on piano and Reggie Workman on bass.

Ugetsu is scheduled to be released on March 15, 2011 by Concord Music Group as part of its Original Jazz Classics Remasters series. In addition to Ugetsu, three other titles will be released that day: Thelonious Monk Septet: Monk's Music; Ella Fitzgerald and Oscar Peterson: Ella And Oscar; and Cal Tjader Stan Getz: Sextet.
Posted by Michael Doherty at 6:10 PM