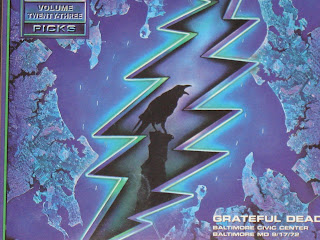 Grateful Dead released a series of live albums called Dick's Picks. Most of these CDs are entire live concert recordings. Volume Twenty-Three is from a show at Baltimore Civic Center in Baltimore, Maryland, September 17th, 1972.

The second disc starts with a great "Playing In The Band." Any "Playing In The Band" from the 1970s is a treat because of Donna Jean Godchaux's excellent backing vocals, especially that near-scream as the band ventures back from foreign territories into the chorus near the end of the song.

The jam section of "Playing In The Band" is fantastic. Sure, there is a section where it gets a little messy, but hey, that's what happens when exploring new territory. At 18:48, it's certainly not the longest "Playing," but it is a fun ride.

Of course, the main piece of the third disc is a thirty-nine minute version of "The Other One." This jam comes out of the end of "He's Gone," and very quickly breaks down so that Bill Kreutzmann is left alone on the drums. After a few minutes, Phil leads the band back into the jam with that monster bass part. And at this point the band is performing with an fierce intensity, and they're not even ten minutes into the song.

From "The Other One" the Grateful Dead seque into "Sing Me Back Home," a sweet and sad song written by Merle Haggard. It's about a man on death row who is about to go to his execution. His last request is to hear a song from his youth, to make his old memories come alive.
The Grateful Dead only performed this song for a few years, but it's a wonderful song, and this is a good version of it.

No Mickey Hart On This Recording
This recording is of a show from those few years when Bill Kreutzmann was the lone drummer. As a result of just one drummer, the jams in those years were looser, and the band ventured off into weird areas.

Mickey Hart had left the band after his father - acting as the band's manager - embezzled money. The band knew it was not Mickey's fault and did not ask him to leave, but those were some serious things for him to deal with, and so he stepped aside until late 1974. (His return to the band was captured in the film The Grateful Dead Movie.)

As mentioned, Mickey Hart was not in the band at this time. Also missing was Ron McKernan (known as "Pigpen"). Though still alive at the time of this recording, his health had deteriorated to the point where he was unable to go on the road with the band. His final concert had been earlier that year, on June 17th. He died March 8, 1973.

This CD does not include the encore played that night, which was "One More Saturday Night."

The following is the track list for Grateful Dead's Dick's Picks Volume Twenty-Three:

Posted by Michael Doherty at 3:25 PM