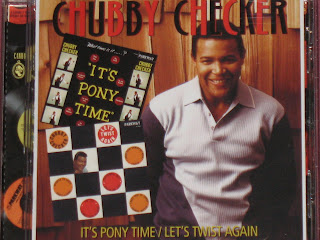 This CD contains two complete Chubby Checker albums - It's Pony Time and Let's Twist Again, both originally released in 1961. Shockingly, these were never before released on CD.
Dance Songs

This is real dance music. These songs are all dance songs. In fact, most of them are names of dances. Listening to this CD is like taking dance lessons. One can learn how to do The Mashed Potatoes, the Watusi, the Hully Gully, the Stroll, the Shimmy, the Continental Walk and others. And the songs whose titles aren't the names of dances, well, they're still about dancing. That makes this CD the perfect party album. Put this album on and just try to sit still - it's impossible.

Some of these songs mention the other songs. For example, "Dance The Mess Around" mentions "The Shimmy," "The Stroll" and others. And "Pony Express" mentions "Hi Ho Silver." And the last song on the CD, "Dance-A-Long," mentions "The Pony," "The Mashed Potatoes," "The Charleston" and other dances.

The album opens with "Pony Time," which was also a #1 single for Chubby Checker. It was written by Don Covay and John Berry. This was his second #1 song, the first being 1960's "The Twist."

"The Hully Gully" is one of the best songs on the album. It was written by Fred Sledge Smith and Clifford Goldsmith. It was originally recorded by The Olympics and released in 1959. It was later covered by such bands as The Searchers and The Beach Boys. Chubby Checker's version is just perfect.

Chubby Checker does "The Charleston" on "It's Pony Time." And yes, it's the 1923 song, but with the lyrics. Who knew this song had lyrics? The lyrics were written by Cecil Mack, and the music was written by James P. Johnson. This is a seriously fun version of the song.

"Dance The Mess Around"

"Dance The Mess Around" is one of those wonderful early rock and roll tunes that somewhat subtly talk about fooling around. By calling The Mess Around a dance, he can sing, "You can Pony with Tony/Twist with Mr. Lee/But if you're gonna Mess Around/Mess Around with me." But of course it's clear that he's saying go ahead and dance with other guys, but anything beyond that she should do just with him.

"I Almost Lost My Mind"

Suddenly there is a slow song, from out of nowhere, called "I Almost Lost My Mind." And it's one of the best songs on the album. It's a very cool song with nice touches on horn. Chubby Checker sings, "When I lost my baby/I almost lost my mind/My head's in a spin/Since you left me behind." This song even has a spoken word section, when the narrator goes to see a gypsy to get his fortune read. The spoken word section starts, "She said it's so hard to love somebody/And no, she don't love you."

"Quarter To Three" is a great rock and roll tune, sounding a bit like "Runaround Sue" at moments. It was written by Gene Barge, Frank Guida and Joseph Royster.

"Let's Twist Again" was also released as a single, and reached #8 on the charts. It was written by Kal Mann and Dave Appell, and the lyrics include references to Superman. "Who's that flying up there? Is it a bird? No. Is it a plane? No. Is it the twister? Yeah." This song is probably the most famous song on the CD.

Dave Appell became the leader of the house band for Cameo-Parkway, backing not only Chubby Checker, but also Bobby Rydell and The Orlons.

Everyone knows the song "Peanut Butter." It's a fun, infectious song that's been covered by other artists including Billy Vera. Go ahead, sing along: "I like peanut butter/Creamy peanut butter/Chunky peanut butter, too."

This song is definitely the strangest of those included on this CD. It's basically "The Charleston" done in the style of Ray Charles, with hints of "What'd I Say."

Ernest Evans (Checker's real name) was born in South Carolina in 1941. He worked at a produce market as a teenager, and he would do impressions of Fats Domino while working. Kal Mann was a regular customer at this market. He was also co-owner of Cameo-Parkway Records, which was just getting its start. He had Ernest do a recording for Dick Clark.

The story is that Dick Clark's wife asked Ernest his name, and Ernest gave her his nickname, Chubby (given to him because he was in fact a bit chubby). And she replied, "Oh, you mean like 'checker?'" - making a joke on the fact that he was doing Fats Domino impressions. Dominoes, checkers. And so he became Chubby Checker.

2010 Release
It's Pony Time/Let's Twist Again is scheduled to be released June 22, 2010. Finally. It's one of a series of recordings to be released by Collectors' Choice Music in conjunction with ABKCO Music & Records.