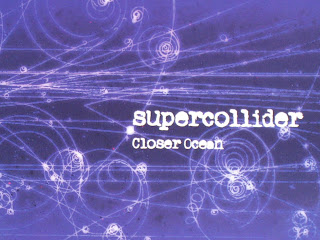 CD features four lead singers and a mix of pop, folk, and electronica, with lyrics adapted from Wislawa's Szymborska's poetry.

Closer Ocean is a Los Angeles band started by Kevin Babuder, who plays piano and keyboards. Kevin also works in the film industry, as orchestrator on films like Daddy Day Camp and The Little Mermaid: Ariel's Beginning.

Supercollider is the band's debut release. For some of the album's songs, Kevin Babuder adapted the poetry of Wislawa Szymborska, who was awarded the Nobel Prize in Literature in 1996.

Interestingly, this band has four different lead singers - two men and two women. So there is a wide range of sounds, of feels. This album is sometimes mellow, sometimes vibrant, and often with a somewhat theatrical bent in instrumentation, presentation and vocalization.

The album opens with "Big Picture Show," a song with a 1970's pop feel. It has some of the theatricality of a band like Yes. Joe Cameron sings lead on this one.

"Please Forgive Me"
"Please Forgive Me" is an interesting mix of folk and techno elements. It's more electronica in the percussion, more folk in the guitar and vocals. Damien Smith sings lead, with Kevin Babuder doing backing vocals.

"Collide" is one of the album's best tracks. The guitar is at times reminiscent of Modern English, and the feel is akin to some of Cloud Cult's material. Jose Ramirez plays bass on this track, and David Leach is on percussion.

It's interesting how many songs take place at 4 a.m. - the incredible "Four In The Morning" by Josh Lederman Y Los Diablos and Leonard Cohen's "Famous Blue Raincoat" leap immediately to mind. Is it a magical hour for songwriters?

To give an idea of the adapting of Szymborska's poetry, here are two lines from the song: "Sweep clean the hour/For the rising of the sun." Here is the original line from the poem, titled "Four a.m.": "The hour swept clean for rooster's crowing."

Closer Ocean's "4 A.M." has a sort of modern R&B rhythm. Kaeyle B Van Keith sings lead on this one.

"Dreams" has a 1980s new wave feel at certain points. Damien Smith sings lead, and his voice has a wonderful soaring quality at times, perfect for the song.

Here is a bit of the lyrics: "I'm so free/always wake before I die/Landing on my feet/When I fall from the sky/you and I in my dreams tonight."

Courtney Chambers sings lead on "Mansion." Hers is probably the most interesting voice on the album. This song is beautiful, and has elements of some of the best of 1980s pop music. It's one of the CD's best tracks.

"When It's Over" begins as folk, with guitar and vocals, but then builds from that base, with Steve Reid on trumpet. There is an interesting drumbeat in the background, but the vocals really drive this song. The chorus is seriously catchy, and listeners may find themselves singing it later.

"Sky" begins with a short, strange spoken word section by Damien Smith in which he repeats the line, "I should have begun with this." Then the female lead vocals kick in - provided by Courtney Chambers. The vocals are gorgeous on this one. "Sky" has a techno dance beat, something akin to certain songs by In-grid. It's an intriguing composition, certainly one of the highlights of this album.

Shawn Costantino plays saxophone and flute on "Dreams" and "When It's Over." Steve Reid plays trumpet on those same two tracks.

Supercollider was released on August 17, 2010. It was produced by Kevin Babuder and mixed by Phil McArthur.