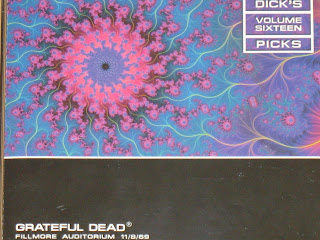 Dick's Picks Volume Sixteen contains almost all of the concert the Grateful Dead performed on November 8, 1969 at the Fillmore Auditorium in San Francisco. The one song that's missing is "King Bee," which was played after "Easy Wind" and before "China Cat Sunflower."

In 1969 Ron "Pigpen" McKernan was still at the height of his power, a driving and vital force of the band. And this CD kicks off with one of his main tunes, "Good Morning Little School Girl." In addition to his great lead vocal part, he plays a pretty mean harmonica on this one.

Pigpen is the member who gave the band a bluesy edge, and as such kept the band somewhat grounded - or rather, gave them a place to land, a return from space. Pigpen could jam as well the rest of them, but it was vocally, riffing on a theme as he does in this song.

He ends the song with the line, "I don't care if you're only thirteen years of age." Often the age was seventeen - he paused before choosing thirteen that night.

This CD has an early rendition of one of the band's most well known tunes, "Casey Jones." There is a lot of energy on this one. They were clearly having some fun. Listen to the way Jerry Garcia sings lines like, "You'd be better off dead" - there is distinct playfulness in his voice.

This song would be released the following year on Workingman's Dead. The Grateful Dead did several other songs from that record that night, including a pretty "Dire Wolf" (with repeated verses), Pigpen's vocal turn on "Easy Wind," an interesting and heartfelt "High Time," and a fun (though slightly messy) "Cumberland Blues." All of these are on the first disc.

"Good Lovin'"
"Good Lovin'" is another Pigpen showcase tune, though the highlight of this version is a tremendous jam that begins with a good drum solo by Bill Kreutzmann and Mickey Hart.

The second disc begins with a nice loose jazzy version of "Dark Star." Tom Constanten's presence is again a wonderful addition. (He toured with the band for just over a year, from November 1968 to January 1970.)

The vocals start approximately five and a half minutes in, Jerry Garcia at some moments almost whispering the lyrics, at other times belting them out.

The year 1969 had some of the best versions of "Dark Star." The band seemed less locked into a structure for this song, more willing to let go of any semblance of form. It gets into spacey territory approximately eight minutes in. Listen to Tom Constanten during that section.

Toward the end, there are hints of "Uncle John's Band." But the song instead slides into a wild and almost scary rendition of "The Other One." (The acid freaks should be prepared for things to turn a little hairy for them.)

"St. Stephen"
"Dark Star" leads almost tentatively into "St. Stephen," one of the band's most beloved songs. What a great monster of a song, driven at times by Phil Lesh's bass, at other times by the vocals. It's a wonderfully complex song, offered here in its entirety. (In later years, the second half of the song would be cut; and in still later years, the song would not be performed at all.)

It leads right into "The Eleven," a song written by Phil Lesh and Robert Hunter, and one that the band stopped playing in 1970 (though they did do a couple of "The Eleven Jams" afterward). The version on this CD is excellent - loud and vibrant.

"Caution (Do Not Stop On Tracks)"

The third disc contains a whole lot of Pigpen. It starts with "Caution (Do Not Stop On Tracks)," which begins with a great big jam before getting to Pigpen's vocals, which come in about five minutes in. This song finds Pigpen at his loosest. It provides him with the most room for improvisation, as it's a Grateful Dead original, not a cover, as are most of the songs that Pigpen sings. Listen to that wild call and response section approximately twelve minutes in.

"Caution" goes right into a jam titled "The Main Ten," which is a precursor to "Playing In The Band." Its inclusion is a treat for fans who like to see how songs evolve.

It leads back into "Caution," and this is where the jam gets incredible and intense. The band is going full throttle at this point - until the song breaks down for Pigpen's vocals once again, with some percussion backing him.

"Caution" leads into "Feedback," which is a free-form jam section, essentially a destruction of everything that came before. At times it sounds harsh.

And then, so as not to leave everyone lost, isolated, in a strange, hard space, the band finishes with the soft and sweet "And We Bid You Goodnight," sung acappella.

Bonus Track
The CD ends with a bonus track from the previous night's concert, and it's another Pigpen showcase tune - "Turn On Your Lovelight." This is a nice, long version at twenty-five minutes. And it has Pigpen's famous advice to the men in the audience to take their hands out of their pockets.

Dick's Picks is a series of live Grateful Dead recordings started by tape archivist Dick Latvala. Dick's Picks Volume Fifteen contains the entire show the Grateful Dead performed at Raceway Park in Englishtown, New Jersey on September 3, 1977. Dick's Picks Volume Seventeen has the complete concert from the Boston Garden on September 25, 1991, and includes the band's first ever performance of Paul McCartney's "That Would Be Something."
Posted by Michael Doherty at 1:12 PM