History Of The Grateful Dead - The 1990s, Part One 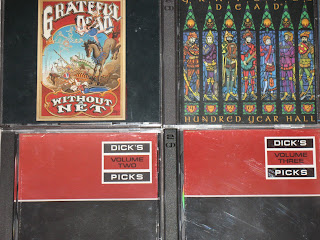 The final decade of the Grateful Dead ended prematurely in 1995 with the death of Jerry Garcia, but still had many magical moments and lots of new songs.

The Grateful Dead released no new studio albums in the 1990s. But they did continue to write new material and introduce it to their live performances. They also chose to cover a lot of new songs during these last few years.

In 1990 the Grateful Dead first performed "The Weight," "The Valley Road" and "Stander On The Mountain," the last two being songs written by Bruce Hornsby. In 1991 the band first performed "Rubin And Cherise" (a song from Jerry Garcia's 1978 solo album, "Cats Under The Stars") and Paul McCartney's "That Would Be Something."

In the first two shows of 1992, they introduced four new songs: "So Many Roads," "Wave To The Wind," "Way To Go Home" and "Corinna." All of these were original Grateful Dead songs. That year also saw "Baba O'Riley," "Tomorrow Never Knows" and "Rain" added to the set lists.

Then 1993 introduced "Lazy River Road," "Eternity" and "Liberty." Those three were all introduced on February 21st. Over the next two nights, the Dead introduced "The Days Between" and "Broken Arrow." "I Fought The Law," "Lucy In The Sky With Diamonds" and "Easy Answers" were also all played for the first time that year.

The band's final year, 1995, brought the first performances of "Salt Lake City" (played only once - 2/21/95), "It's All Too Much," "Take Me To The River" (a song written by Al Green and Mabon Hodges), "Rollin' And Tumblin,'" and "Unbroken Chain." "Unbroken Chain" was a song the Grateful Dead included on their 1974 studio release, From The Mars Hotel, and yet had never performed in concert until March 19, 1995.

The band also mixed up where songs fit into the set lists. For example, in New Jersey in 1991, they opened a show with "Eyes Of The World," a song that hadn't been played in the first set since 1975. Later that year in Mountain View they played "Dark Star" in the first set, something they hadn't done since 1971.

This is the first part of a two-part article. "History Of The Grateful Dead - the 1990s, Part Two" focuses on the final tour and the deaths of Brent Mydland, Bill Graham and Jerry Garcia.
Posted by Michael Doherty at 2:02 PM