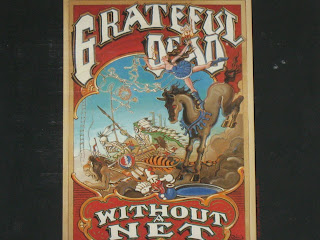 This two-disc CD contains live concert material from various concerts the Grateful Dead performed between October 1989 and April 1990, including "Althea."

This album contains two discs. The first disc is titled "First Set," and the second set is titled "Second Set." But these songs are not from one particular Grateful Dead concert, but rather culled from various shows between October 1989 and April 1990.

Without A Net came out a few years before the Dick's Picks series and the idea of releasing full sets or shows. So in a way, the first disc is an ideal first set, with excellent versions of songs picked from various shows. And the second disc is a sort of ideal second set, though it contains no version of "Drums" or "Space," which were always performed in the middle section of the second set in the 1980s and 1990s.

The first disc opens with "Feel Like A Stranger." When Bob Weir sings, "You know it's gonna get stranger, let's get on with the show," the audience cheers. This was always a great song with which to open a show. Brent sings, "It's going to be a long, long crazy, crazy night." The section where Bob and Brent go back and forth, trading promises of how long and crazy the night is going to be is wonderful. And of course any night with a Dead concert was a bit crazy (though never long enough).

That's followed by the beloved "Althea." A fair number of children born to Dead fans were given the name Althea. Perhaps a strange choice considering that the lyrics mention "the fate of Ophelia," and everyone knows what happened to her. This song also has the wonderful lines, "I told Althea I'm a roving sign, that I was born to be a bachelor/Althea told me, okay, that's fine - so now I'm trying to catch her."

This song originally appeared on the band's 1980 studio release, "Go To Heaven." The version included here is from a concert the Dead did on March 15, 1990 at the Capital Center in Maryland.

"Cassidy" and "Let It Grow"
"Cassidy" is a beautiful song, and this version benefits from Brent Mydland's backing vocals. The jam during this one might be a bit too busy, but it makes it all the more wonderful when they break back to the lyrics.

The first CD ends with a really great version of "Let It Grow." It has some high-energy jamming. This song also features some wonderful lyrics, such as "Water bright as the sky from which it came,/And the name is on the earth that takes it in./We will not speak but stand inside the rain,/And listen to the thunder shouting I am! I am! I am! I am."

Branford Marsalis on "Eyes Of The World"

Branford Marsalis sits in on saxophone for "Eyes Of The World," which is a wonderful touch to an already incredible song. This is one of the Grateful Dead's best. The saxophone of course adds a jazzy feel to the jams. It really works. The Dead should have invited him to play with them more often. The Grateful Dead already have a jazz element built into their music, because of the nature of jamming and especially with the drumming of Bill Kreutzmann.

The version included here is from a concert the Grateful Dead did on March 29, 1990 at Nassau Coliseum in New York. Branford Marsalis sat in with the band for the entire second set that night.

"Help/Slip/Frank"
"Help On The Way," "Slipknot!" and "Franklin's Tower" are all included on one track. These songs were originally released on the 1975 album, Blues For Allah and were usually played together. "Help On The Way" ends with the line "Without love in the dream, it will never come true," a favorite line of Grateful Dead fans. This version of "Franklin's Tower" is phenomenal. Jerry sings, "If you get confused, listen to the music play." Indeed. Just listen to this version.

But sadly, it fades out after five and a half minutes, which is just not nearly long enough. In concert, this song led into the "Hey Jude" finale.

The following is the track list for Grateful Dead's Without A Net:


The Grateful Dead dedicated "Without A Net" to Clifton Hanger, which is a name that Brent Mydland used when registering at hotels. Brent Mydland died two months before this album's release. There is a really nice photo of him included in the liner notes of this CD. In the photo, his daughter is seated next to him on his piano bench.
Posted by Michael Doherty at 1:39 PM