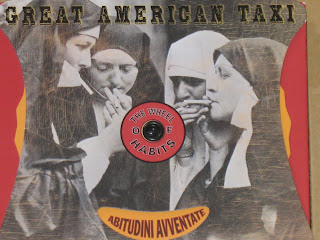 Fronted by Vince Herman, from Leftover Salmon, Great American Taxi plays a great combination of country rock and bluegrass, with some New Orleans flavor thrown in.

The album opens with "One Of These Days," and oh boy, it's a fun song. It has a great New Orleans sound. Think Dr. John at his liveliest.

"Get No Better" is a great, positive song. It's uplifting, and it has a good groove. This song was written by John Hartford. There is some really cool guitar on this song, and the horns are wonderful.

Uncle Tupelo Cover
"New Madrid" is a more mellow song, with a country feel. It was written by Jeff Tweedy, and originally performed and recorded by Uncle Tupelo, and released on their fourth album, Anodyne (1993). This is a really good version, being true to the original, while at the same time giving the song a bit of a new life.

"Unpromised Land" combines bluegrass and rock, with a sudden Irish folk turn nearly three minutes in. And then it just keeps going. Wonderful, wonderful. This is certainly one of the best songs on the album.

"Reckless Habits" Has References To Other Country Rock

"Reckless Habits," the title track, has references to other country rock songs, albums and bands. References include "Sweethearts Of The Rodeo" (an album by The Byrds), "Wild Horses" (a Rolling Stones song), The Flying Burrito Brothers and "Drugstore Truck Driving Man." It's a good country song itself.

"Cold Lonely Town" has a cool, slow groove. This song gets right inside the listener, and makes a home for itself there. And then there are these incredible female vocals near the end - courtesy of The Black Swan Singers. This is a really good song.

"Tough Job" is a country rock song about playing music in a honkeytonk band. It's one of the less interesting songs on the album. The main line is "It's a tough job, but somebody's got to do it," which is such a cliche it should be banned from all songs and all conversation.

This song and the next song, "Fuzzy Little Hippy Girl," which is a silly little country rock song, are really the only two weak tracks on the album.

"Big Sandy River" is fun instrumental, with that quick bluegrass tempo. It was written by Bill Monroe and Kenneth Baker, and it's got a nice fiddle part.

The CD box has a wheel. When turned so that it says "Reckless Habits" on the front, on the other side a gun will be pointed at a nun's head. Just saying. Enjoy.


There is actually a 14th track on this CD, which isn't listed. It's a short (approximately two minutes) New Orleans jazzy type instrumental.
Posted by Michael Doherty at 2:12 PM