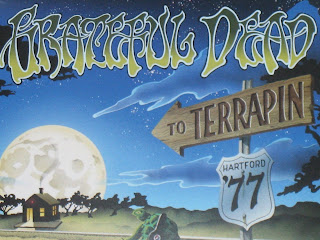 This three-disc CD contains the entire concert the Grateful Dead performed on May 28,1977, including an excellent "Playing In the Band."

The year 1977 was a magical one for the Grateful Dead, a year when everything seemed to go right, a year when the band was just on. It was the year of "Terrapin Station," a song that came about by dual inspiration.

The story has oft been told about how Robert Hunter came up with the lyrics, and Jerry Garcia separately came up with the music, and how the two came together to share what each had been doing - and the music and lyrics fit perfectly together. And it was a song so different from anything either had written before, and one of the best songs the band would ever perform. As might be expected because of this CD's title, a version of the song is included on this live album.

To Terrapin: Hartford '77 contains the complete concert that the Grateful Dead performed on May 28, 1977 at the Hartford Civic Center.

The band opened the show that night with a great version of "Bertha." Sure, the energy is there. And the vocals sound heartfelt and clear and amazing. But there is also something beautiful about this version. Part of it is Donna Jean Godchaux's backing vocals, which are wonderful.

"Bertha" leads right into "Good Lovin'," a song the band had been doing since the early days but had recently revamped (it would be included on the following year's studio release, Shakedown Street).

The band was off to a rocking start on this night. No time spent warming up. No easing in. Just jump right in with everything they had.

"Sugaree"
"Good Lovin'" leads right into "Sugaree." It's always a treat to hear this one, and this particular rendition has some nice long jamming. This version is approximately nineteen minutes long. There is some sweet piano playing by Keith Godchaux, and of course some excellent guitar work from Jerry Garcia. There are a couple of brief moments when the jam gets just a bit messy, when the band wasn't completely in synch - but that's fine.

The first disc also contains some beautiful songs, including a sweet and easy version of "Jack Straw." The vocals sort of disappear for a moment when Jerry forgets the lyrics to a couple of lines, but it's still a really good version. Jerry Garcia's voice is particularly wonderful on "Row Jimmy."

"Row Jimmy" is one of those songs where on a good night the emotion would just flow from Jerry's voice out over the crowd. May 28, 1977 was clearly one of those nights. Especially as he sings, "Broken heart don't feel so bad/You ain't got half of what you thought you had/Rock your baby to and fro/Not too fast and not too slow."

"Passenger" was a song the band played only from 1977 to 1981. Bassist Phil Lesh wrote this one with Peter Monk. It was included on the band's 1977 studio release Terrapin Station. The version on this CD has some good energy and some excellent work on guitar by Jerry Garcia. It has a great ending too.

Jerry Garcia's voice continues to shine on "Brown-Eyed Women." He hits the powerful emotional heights, but also sounds sweet on those quieter moments, trusting the audience to stick with him on the journey.

The first set ended that night with a great old rock and roll tune, Chuck Berry's "Promised Land." As the band left the stage for their set break, they said, "We're gonna take a short break and you can too."

The second set started with "Samson And Delilah." Bob Weir's vocals are intense on this one, and the jam just rocks. The energy is phenomenal. And Donna Jean's vocals combine so well with Bob's.

The third disc opens with "Estimated Prophet," a song from Terrapin Station (1977). This is one of the best songs the band ever did, with lyrics by John Barlow and music by Bob Weir. The jam in this version is really cool, with some unusual riffs from Jerry. And Bob's vocals return unexpectedly right at the end - a nice touch.

"Estimated Prophet" was often paired with another favorite, "Eyes Of The World." But on this night it led into another Bob Weir tune, "Playing In The Band."

This is a seriously interesting rendition of "Playing In The Band." What is Keith playing here? It's certainly not his usual piano. Whatever he's doing, it sounds great. And of course Donna Jean's vocals are excellent, as they usually are on this song. There is some interesting stuff from Phil on bass too, and some jazzy stuff on drums. Everyone was venturing off into new areas, and it sounds fantastic. This is one of the best versions of this song, though at eleven minutes, it's a bit short.

But it does transition easily and perfectly into "Terrapin Station."

"Terrapin Station"
At the point of this concert, "Terrapin Station" was only a few months old. Each Grateful Dead fan has his or her favorite song, but a case could be made for "Terrapin" being the greatest song the band ever performed. It's beautiful and has the potential for eliciting all sorts of emotions from the audience. It features several distinct sections and excellent lyrics by Robert Hunter.

This song really is a journey. By the time Jerry sings, "Inspiration," the audience is fully involved, fully invested in the story. And the version on this CD is phenomenal.

The band brings the audience back from the "Terrapin" journey with a great rendition of Buddy Holly's "Not Fade Away." Interestingly, this is the longest song of the second set, at fifteen minutes. It features a nice long jam that becomes pretty far removed from the main thrust of the song. It's actually some of the most interesting jamming on this CD.

And it leads right into "Wharf Rat." "Wharf Rat" is another emotionally charged song, and Jerry's voice sounds perfect. He sings, "I'll get up and fly away." That leads back into "Playing In The Band."

May 28, 1977 was a Saturday, and so of course the band ended the second set with "One More Saturday Night." Bob really puts all of his energy into it, and it's a fun version. The encore is a playful version of "U.S. Blues."