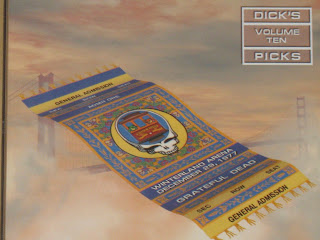 This three-disc set contains nearly the entire concert the Grateful Dead performed at The Winterland on December 29, 1977. The band was on fire that night.

The first song is a very cool version of "Jack Straw." It's very energetic, especially near the end.
"Looks Like Rain"

The band does a seriously pretty "Looks Like Rain." It starts off with just a bit of guitar and Bob's vocals. And then the song kicks in, and it's just wonderful. Donna Jean Godchaux and Bob Weir sound so great together on this one.

Jerry's guitar on "Sugaree" is so sweet. And the drums under it are rolling just perfectly.

Before "Promised Land," there is more joking about getting things perfect. The band seriously rocks at the end of this song, and it's time for a set break. "We're gonna take a short break and you can too."

The second set starts with some Close Encounters Of The Third Kind tuning, which leads into a rocking and roaring "Bertha." And that goes right into "Good Lovin'" - no pause, no slowing down. Holy moly, the band was on fire that night. This "Good Lovin'" is a huge lively friendly explosion of energy. This song has the energy of a set closer, and it's only the second song.

CD Is Missing Two Songs From The Concert
For some reason the next two songs the band played that night are not on this CD. Those songs are "It Must Have Been The Roses" and "Sunrise." Their absence makes no sense, especially as the third disc contains filler material from the show performed the following night.

The band then kicks into "Playing In The Band." There are a few weird notes in there, but the song rocks and the jam is interesting and jazzy.

The jam after "China Doll" leads into a short drum solo, during which they tease a bit of "Not Fade Away." The band then jumps in and it's a fantastic and boisterous rendition of the Buddy Holly classic. After that they go back into a bit of "Playing In The Band" to close out the second set.

After that, they thought they were done, but the audience wasn't through with them and called them back for a second encore. The Dead closed the night out with a seriously rockin' "Johnny B. Goode."

The last four songs on the third disc are from the concert the following night, also at Winterland Arena. These are the last four songs of the second set, and include an excellent "Estimated Prophet" into a phenomenal "Eyes Of The World." That leads into "St. Stephen" and on into "Sugar Magnolia." On the "Sunshine Daydream" section of that song, Bob's voice is so wild and insane.

The following is the track list for Grateful Dead's Dick's Picks Volume Ten:

Posted by Michael Doherty at 2:03 PM