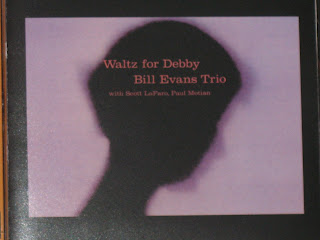 Waltz For Debby is the fourth album released by the Bill Evans Trio. It's a live album recorded at the Village Vanguard in New York on June 25, 1961. And it's the final album featuring the incredible bassist Scott LaFaro, who died in a car accident only two weeks after the recording.

The Trio's previous album, Sunday At The Village Vanguard, also featured music from the same session, but focused on songs with bass solos. The Bill Evans Trio actually did five sets on June 25, 1961, all of which were recorded. This special re-issue includes bonus tracks, including three alternate takes from the night.

"My Foolish Heart"
The album opens with "My Foolish Heart," a song written by Ned Washington and Victor Young. It's that great mellow late-night jazz, when you've had too many whiskeys and the one gorgeous woman in the joint gives you the eye, but only as she's leaving, and with another man. So you order one more drink and enjoy the band's last song - even as the bartender is cleaning up. It's beautiful and sad, and sits right there in your gut.

This song was originally in the film, My Foolish Heart (1949). The song was nominated for an Oscar.

"Waltz For Debby," the album's title track, is a fun and quirky tune. It has a pretty beginning, the piano and bass working so well together, like two friends playing a game.

Then there's a moment of chaos just before the drums come in with a shuffling rhythm. At that point, the bass is freed to go off in all sorts of directions, and it's wonderful. Four minutes in, Scott LaFaro on bass takes the lead, and it's just great, with the piano and drums playing quietly beneath him. The bass rushes in bursts, like it's telling some crazy story that it can only get out in spurts.

This is an excellent song, written by Bill Evans.

"Detour Ahead" is another slow, late-night affair, with the bass and piano hesitating, then offering little gems of wisdom. Then it comes together, as if gaining confidence, some inner strength or even joy. And Scott LaFaro again takes the lead on bass.

"Detour Ahead" was written by Lou Carter, Herb Ellis and Johnny Frigo.

"My Romance" starts with just Bill Evans on piano. The song has a sweet opening. After a minute, the bass and drums come in, changing the feel and tone. It becomes a fun song, a joyful song. The piano lightly plans, like skipping about over the ground, dancing.

"My Romance" was written by Richard Rodgers and Lorenz Hart for the 1935 musical Jumbo.

A simple bass line begins "Some Other Time," and the piano comes in quickly, with light touches. The drums come in with just the cymbals at first. The song has a nice, easygoing feel and rhythm, with some sweet, tender moments.

"Some Other Time" was written by Betty Comden, Adolph Green and Leonard Bernstein.

"Milestones" is the final track of the original release. Paul Motian really comes alive on drums on this track. This song is definitely one of the CD's highlights. It has a great rhythm, and Bill's piano playing over it is wonderful. And Scott's turn at lead on bass is wild, sounding like a guitar at moments. It ends with the bass and some laughter and applause.
"Milestones" was written by Miles Davis. Bill Evans had actually played with Miles Davis in 1957, but does not appear on the album Milestones, which was released in 1958.

This special re-issue contains five bonus tracks. The first is a great rendition of "Porgy (I Loves You, Porgy)," which was written by George Gershwin, DuBose Heyward and Ira Gershwin. It has a soft beginning with the piano over a steady bass line. Then the song gains a good rhythm, and the bass finds room for play. But it is definitely Bill on piano who is the heart of the song.

The second bonus track is a bit of stage banter while the band decides what to play next.

The last three tracks are alternate takes of "Waltz For Debby," "Detour Ahead" and "My Romance." This take of "Waltz For Debby" has that same wonderful sense of play between the piano and bass, and it is slightly shorter than the other take. It has a great ending.

This take of "Detour Ahead" is also slightly shorter than the other take, and features some great work on bass. The last track is an excellent version of "My Romance," which is, oddly, the exact same length as the other take.


The Bill Evans Trio is Bill Evans on piano, Scott LaFaro on bass and Paul Motian on drums.

This CD was released on September 28, 2010 through Concord Music Group. Four other titles from this series were also released on that date, including Miles Davis Featuring Sonny Rollins: Dig, Vince Guaraldi Trio: Jazz Impressions of Black Orpheus, Wes Montgomery: Boss Guitar, and Chet Baker: Sings - It Could Happen To You. Waltz For Debby was originally released in 1961.