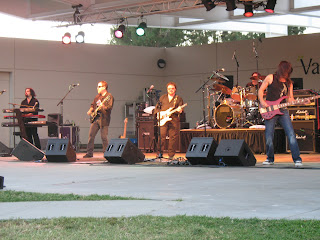 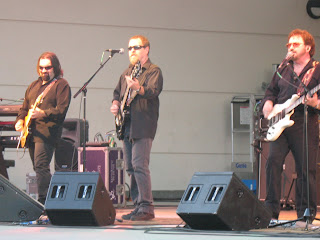 Blue Oyster Cult performed at Warner Park on Sunday, August 15, 2010 as part of the Valley Cultural Center's Concerts On The Green. The show began just after 6 p.m. with a really good opening set by Allison Geddie. Blue Oyster Cult took the stage just before 7 p.m.

They opened the show with "The Red & The Black," a great rock song to start the night right. The band then went into "Before The Kiss, A Redcap" from the first album. This song has a really nice bass line. It's a fun, rockin' tune with a simple driving drum beat.

The band then played "Burnin' For You," one its most well known songs, from the 1981 release Fire Of Unknown Origin. There was a vocal microphone issue for just a moment, but it didn't mar this version of one of the band's classic hits. From there, they launched into "Shooting Shark," a very cool tune with a nice long jam, and followed it up with more jamming with the fun instrumental "Buck's Boogie."

"Cities On Flame With Rock And Roll"

For the hard rock fans, Blue Oyster Cult did "Cities On Flame With Rock And Roll," a heavy, hard rockin' song from their very first album. At the end, they sang, "Rock and..." and the audience shouted back, "Roll." They did this several times, quicker and quicker. Sure, it's a bit silly and cheesy, but who cares? It's a fun rock show. Toward the end of this song, there was a strange guitar solo.

"Then Came The Last Days Of May" is a nice long song with some great work on guitar. This song was also included on their first album.

"Godzilla" is a great and silly rock tune from the band's 1977 release Spectres. The band milked it for all it was worth, which is of course what everyone expected and what everyone wanted. They joked during the song's introduction that it's about paleontology and the one surviving dinosaur.

Rudy Sarzo, the bass player, is interestingly the biggest show man of the band, moving all over the stage. Rudy was not the original bass player for Blue Oyster Cult, but his name is familiar to fans of hard rock. He played with Ozzy Osborne, Quiet Riot, Whitesnake and several other bands.

Blue Oyster Cult ended the set with their most famous song, "(Don't Fear) The Reaper." It was predictable, sure, but it was also great. Everyone was up and dancing for this one.

The encore was "Hot Rails To Hell."

The Valley Cultural Center estimates that 7,000 people attended the Blue Oyster Cult concert. Most of the people were cool, but there was of course that one inbred moron with several teeth missing who demanded that people in front stop dancing during "Godzilla." He threatened a couple of people, who refused to comply with his ridiculous demands, but fortunately a friend of his was wise enough to pull him away before he did something stupid. It's a shame these people are let out of their cages, but this guy didn't really dampen the spirit of the audience. Everyone seemed happy at the end of the show. They'd gotten a good evening of rock from Blue Oyster Cult.