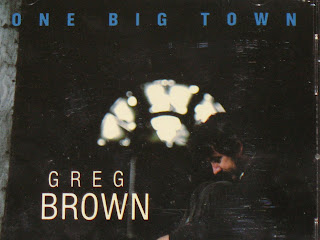 One Big Town has a different feel from a lot of Greg Brown's releases. There is a full band, and a more rocking sound on some of the songs.

Greg Brown starts this album off with a bang with "The Way They Get Themselves Up." It's a full band song, not one of his quiet acoustic numbers. It's also one of the less interesting songs on the album.

The second song, "The Monkey" has a nice build, though it ultimately doesn't truly reach another plateau. Still, it's a cool song. The lyrics include "A glow beneath A bang above/A whimper at the end of love/No one has slept and sweetly dreamed/Not since the monkey bucked and screamed."

"One Cool Remove" is a good song that suffers a bit from Greg's double vocals interplay. It makes up for that with a nice saxophone part.

"Just Live" is more of a rock song, with the main guitar part done on an electric guitar. Its chorus is simply, "Just live until you die/That's all - just live."

"One Big Town" is a quieter acoustic song, and it's a much better song. The lyrics include, "We hear the same song, see the same show/Under the shadow of the end-/Fear for our children wherever they may go/As we watch the red, red blood flow again." The song does go on a bit longer than it needs to, at just over six minutes.

"Things Go On" has an almost slow reggae feel, or like early Police material.

"America Will Eat You"

This is the best song on the album, and among Greg Brown's greatest songs ever. This is the song that truly makes this CD worth owning. It's a fairly bleak look at this country, and completely honest. It starts, "There's only so many times you can eat that rubber food/'Till you're gonna say, Well, that's all there is, I'm eating it, I guess it must be good/There's only so many times you can sit and watch tv/Stay detached and think it's stupid/and that you're somehow free."

Another excellent verse is: "We're tempting little morsels on the corporation's fork/If you show up with the right bits and bytes, they'll fatten you like pork/And America will stretch her maw and show you her white teeth/It's only when it's much too late you'll see the cancer underneath."

This song got a lot of airplay on college stations like WERS in Boston when it was first released. This is the song that turned a lot of people onto Greg Brown. Also, the lyrics contain a reference to the film Invasion Of The Body Snatchers. So there.

"Tell Me It's Gonna Be Alright"

The album ends with "Tell Me It's Gonna Be Alright," a really sweet song. It has a nice keyboard part by Radoslav Lorkovic. The lyrics include, "Tell me no more snow will fall/Tell me all about the warm sunlight/Tell me you'll hear me when I call/Tell me it's gonna be alright."

Full Band On This CD

(Radoslav Lorkovic will be familiar to anyone who has seen Ellis Paul at Passim during his New Year's Eve run of shows the past several years.)

This album was released on Red House Records.

The following is the track list for Greg Brown's "One Big Town":