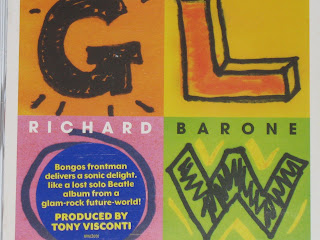 Richard Barone's new album, Glow, is full of excellent vocals, catchy rhythms, interesting lyrics. It's odd, because this album is reminiscent of many things - The Beatles, 1980s New Wave, David Bowie, ELO, The Submarines - while simultaneously sounding completely original. How does Richard Barone do that? Don't worry about it. Just put on the disc, and enjoy.

The album opens with "Gravity's Pull," a wonderful pop rock song slightly reminiscent of 1980s New Wave gems and featuring great vocals. (The New Wave angle makes sense, of course, as Richard Barone was the front man for The Bongos, a band that formed in the early 1980s.) The chorus is "I feel gravity's pull/It's what keeps me here/Makes my emptiness full/Oh, so full -/How I want to fly against gravity's pull." This song, like the majority of this album's songs, was written by Richard Barone and Tony Visconti. Lisa Haney plays cello on this track.

"Glow," the album's title track, features wonderful vocals. At times it sounds like something George Harrison might have written in the late 1970s or 1980s. It's a positive song that was done in one take. Richard Barone wrote the lyrics and music to this one.

"Girl" is a strange and wonderful little tune, with some nice percussion and intriguing changes and vocals. It was written by Marc Bolan (of T. Rex) in 1971, and originally appeared on T. Rex's incredible album Electric Warrior. The lyrics include these lines: "O Girl/Electric witch you are/Limp in society's ditch you are/Visually fine/Oh yes you are/But mentally dying."

"Silence Is Our Song" was co-written by Paul Williams. Yes, that's right, the guy that wrote "We've Only Just Begun" and "You And Me Against The World" and "An Old Fashioned Love Song." He wrote the lyrics for this song; Richard Barone wrote the music. Here is a bit of the lyrics: "There's no more normal in this world/as we face the unknown/We search for kindness in a night/that we can't face alone."

"Silence Is Our Song" features a sweet and sad cello party by Lisa Haney. Johnny Rodgers plays piano on this track, and it's the piano that starts the song. Rodgers also does backing vocals.

The song "1-2-3...Infinity" is a ridiculously catchy pop song, particularly on the chorus. But is it any good? It seems like something that would be at home on the soundtrack for The Apple. (Remember that one?) But it's hard to dislike it.

The vocals and music during the chorus of "Candied Babes" are beautiful. Richard sings, "This will last forever/This time we've got nothing but time/The party lasts forever/In spite of the signs." And then this cool guitar part comes out of nowhere. This album is full of surprises like that. It's a total delight. The only negative thing about this song is the odd and unnecessary crowd noise at the beginning and end.

"Radio Silence" was written and performed by Richard Barone. No one else appears on this track. It's a good tune, though it does get a bit repetitive at the end. According to the liner notes, he recorded and mixed this song at home.

"Odd Girl Out" was co-written by Jill Sobule, who also performs backing vocals on this track. It's one of the album's best songs, about a lesbian named Helen back in the days before Stonewall, and then in current day in the final verse. Tony Shanahan plays bass; Tommy Goss plays drums; and Steve Rosenthal plays a Jew's harp and the Hammond C3 organ.

"Sanctified" has a slow, nice acoustic beginning, and then it kicks in like a late 1960s/early 1970s hard psychedelic jam. Just wonderful. This song is a total surprise and treat - another of this album's best songs. The lyrics include these lines: "There's not much I haven't tried/There's not much I need to hide/The angels line up on my side/I must be sanctified." Dennis Diken is on the drums for this track.

The album concludes with a different, instrumental version of "Glow" titled "Glow Symphony." And indeed, this version features violins and cello, as well as electric cello. These are side by side with old synthesizers and keyboards, such a Mellotron. As the electronic instruments fade at the end, the natural strings are allowed to take over and finish the song. Yoed Nir plays the cello and the electric cello. Deni Bonet plays violin on this song.


Richard Barone's Glow was produced by Tony Visconti, who also co-wrote many of the songs. This might also explain why at times the album reminds one of David Bowie - for Visconti produced and performed on many David Bowie albums. He also produced T. Rex's Electric Warrior album.

In the photo that graces the back of the liner notes, Richard Barone is wearing a Lou Reed Transformer T-shirt. The Velvet Underground is clearly another influence. Yet, Richard Barone is not copying that band, or anyone else for that matter - not The Beatles, not David Bowie, not ELO. This album has its own style, its own feel, its own flow, despite the obvious myriad influences. Glow is scheduled to be released September 14, 2010 on Bar/None Records.