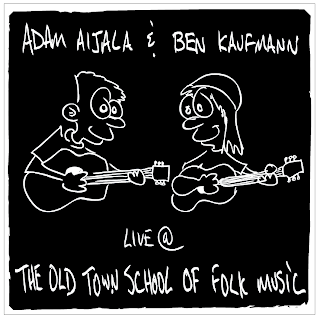 This CD contains highlights of a show that Adam Aijala and Ben Kaufmann performed in Chicago on April 24, 2010, including an incredible "The Boxer."

Adam Aijala and Ben Kaufmann will be familiar names to fans of bluegrass music and fans of the jam band scene, for they're members of Yonder Mountain String Band. In that band, Adam Aijala plays guitar, and Ben Kaufmann plays bass. On this recording, Adam gets the chance to play a bit of banjo, and Ben plays guitar and even mandolin, in addition to bass.

The songs obviously have a more folk bent than a bluegrass sound on this recording. And though some of these songs are ones that they perform in Yonder Mountain, this album presents a new way of looking at the material. And it works wonderfully. The album has a loose and friendly feel, like they're playing on your back porch - for you and some friends.

These are two seriously talented musicians and songwriters, and this album showcases their vocal talents as well as their great ability on guitar and bass. This show was part of a short tour of intimate venues, with a seated, listening-room atmosphere.

They actually did two sets that evening. This CD represents the best of that show, with the tracks that Adam and Ben considered the best moments. It's over an hour of highlights from the concert.

The stage banter is separated for the most part, put on separate tracks from the songs, which is nice. The CD opens with a stage banter track, with them talking about how glad they are to be at that particular venue.

"Pockets" is a wonderful song written by Adam Aijala and Dave Johnston, and one that Yonder Mountain String Band performs in concert. This song has a fun rhythm, and Adam does some phenomenal work on guitar, particularly in the instrumental sections.

Ben starts "Complicated" by saying, "Give me some power chords, Adam." Adam responds, "You want power?" Well, Ben has it on this song, especially in his voice. Ben's voice simply soars on this one. And when Adam adds his voice, it's just this side of magic. The refrain is "In my own defense/I don't believe that I was born this complicated."

This is one of the CD's best tracks. "Complicated" was written by Ben Kaufmann and included on Yonder Mountain String Band's 2009 release The Show.

"Not One Drop" is a wonderful, playful, and even joyful instrumental track written by Adam Aijala. (Try listening to this without smiling - it's impossible.)

During the song's introduction, Adam jokes, "We may look serious on stage sometimes, but we're not." Ben then teases him, "I never look serious. You look - They call you the Ice Man."

"Sometimes I've Won" is another tune that they often do at Yonder Mountain concerts. Ben Kaufmann wrote this one, and the lyrics are excellent. Here is a little taste: "I've had friends, they've come and gone/I've seen love shine like a sunset and last about as long/In the end we're all walkin' different roads/But we're lookin' for the same signs, the ones that lead us home."

The version on this CD is excellent, and it features Adam Aijala on banjo.

"The Boxer"
Adam and Ben do an excellent cover of Simon & Garfunkel's "The Boxer." Their voices sound beautiful. It takes some guts to tackle a song like this, and they do a great job with it. It's seriously impressive, the way they capture the sadness of the song, especially on lines like, "Asking only workman's wages/I come looking for a job/But I get no offers/Just a come-on from the whores on Seventh Avenue/I do declare, there were times when I was so lonesome/I took some comfort there."

The original version of this song is on Simon & Garfunkel's album Bridge Over Troubled Water.

"I Love What I Do For A Living"

"I Love What I Do For A Living" is a song written by Ben Kaufmann about playing music in bars for a living. It has a nice country feel to it. The track before the song is a stage banter track, and in it Ben tells the story of when he was writing the song. It's actually a really sweet (and ultimately very funny) story.

Ben introduces "Just Us" by saying "It goes real pretty, like this," and that Ben is no liar, as the song is really pretty. It's a sweet-sounding mellow tune that Ben wrote. Here is a bit of the lyrics: "Out at the lighthouse, it was just us/For miles and miles/Watching all the other stars fall from the sky/You are the only one."

"Downhill" is a fun and quirky instrumental track that Adam wrote. In his introduction to this song, Adam says, "Ben's going to rip it on the mandolin." And yes, Ben Kaufmann plays mandolin on this one. This song hits a beautiful stride, and keeps it up. This is one of those instrumentals that is designed to make you feel good, to get your toes tapping.

The first line of "Catch A Criminal," "Going back to Colorado," gets a cheer from the audience (Yonder Mountain String Band is based in Colorado). This is one they often do at the Yonder Mountain shows, and it's always a pleasure to hear it. And here it is, stripped down a bit, but still with that great groove, that wonderful energy.

There is some incredible work on guitar on this track. "Catch A Criminal" was written by Ben Kaufmann and Dave Johnston, and was included on Yonder Mountain String Band's 2009 release, The Show (though on that album it's listed as simply "Criminal").

"Tear Stained Eye"
"Tear Stained Eye" is a song written by Jay Farrar, and included on Son Volt's debut album, Trace. It's a beautiful song with that tinge of sadness that Farrar puts in most of his material. Adam and Ben do a wonderful rendition, perfectly producing and embodying that emotion.

Yonder Mountain String Band often coves The Beatles in concert, performing songs like "Only A Northern Song." On this album, Adam and Ben do a wonderfully sparse (and yet still with a rock feel) version of "One After 909."

"One After 909" was actually one of the earliest John Lennon/Paul McCartney compositions, but they didn't include it on an album until 1970's Let It Be, the band's final studio release.

"Worker's Song" is a wonderful and serious folk tune written by Ed Pickford. This version by Adam and Ben is just perfect. The vocals have that earnest power and emotion that's needed to make a song like this work. Here is a taste of the lyrics: "In the factories and mills/In the shipyards and mines/We've often been told/To keep up with the times."

This CD concludes with a fun rendition of the Grateful Dead's "Touch Of Grey." As Adam strums the first chords, the crowd cheers - obviously being familiar with the song. This is one of the few Grateful Dead songs that even non-fans know. It was the Grateful Dead's one big hit, from 1987's In The Dark.

This is a wonderful rendition. Ben says before the song that he really wants to play it. And his desire shines in his voice and his playing. And Adam's guitar solo is excellent. Sure there's a goof near the end, but who cares? They laugh it off. And besides, before the song, Ben said, "I'm going to play it perfect just like they did." Just like the Grateful Dead, a band that often botched a line or two of their own lyrics and kept on going.

This CD was released September 18, 2010. It had a very limited press of only 200 copies. Proceeds from the sales of this disc benefit the Four Mile Fire victims. It is uncertain whether a wider release of this recording will become available. Originally it was planned for a wide release, but there is now talk of possibly releasing a different live performance. Let's hope that this album becomes widely available, because it's one of the best releases of the year.

The Old Town School Of Folk Music has been around since 1957, though in a different location at that time.