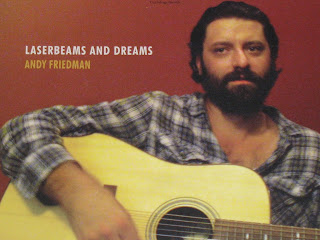 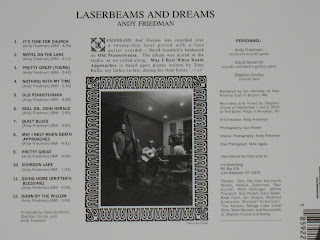 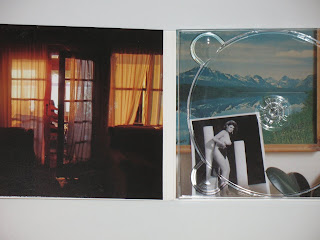 Laserbeams And Dreams is a phenomenal album of songs both tender and raw, with beauty and truth. Andy Friedman's vocals convey a quiet power and intensity that is at times comforting and other times almost unnerving.

All the songs on this album are originals, written by Andy Friedman. The songs feature excellent lyrics, clearly the work of a poet. Andy is able to create clear, living images in his songs, partly through attention to details which are distinct and vivid. The songs seem to act like photographs, describing specific places and times. Great examples are "Motel On A Lake," "Old Pennsylvania" and "Roll On, John Herald," all of which actually have direct references to photographs and snapshots in their lyrics.

"It's Time For Church"

The album opens with "It's Time For Church." Right away Andy Friedman calls to mind Johnny Cash around the time of American Recordings. It's the voice - and the volume of the voice in relation to the guitar at the beginning of the song. Then the bass and guitar punch you in the gut a minute and a half in. There is a raw force in the song - in Andy Friedman - and yet also a sense of humor. After all, "The sky is Brooklyn Dodger blue."

"Motel On The Lake"

In "Motel On The Lake" Andy Friedman provides echoes of a once-populated resort, but with a reference to Dirty Dancing, calling to mind a very specific type of summer place. Andy has a great ability to conjure precise images in the minds of the listeners.

The song features excellent lyrics like, "Children on their honeymoon." The song begins, "There's a motel on the lake/Where all the old things go/Where all the shades are drawn/And ghosts of summer show/Snapshots projected on the wall."

The line "Snapshots projected on the wall" can also be taken as a reference to Andy Friendman's performance pieces in the years before he picked up the guitar.

"Nothing With My Time"

"Nothing With My Time" is a quiet, contemplative acoustic song. The title of the album is contained in this song's lyrics: "Surrounded by winter streets and neon heat/Emily riding on my back/Laserbeams and dreams/Doing nothing with my time." This song has a long, slow fade - like time itself drifting away.

"Old Pennsylvania" is a pretty folk tune that is so effective at creating a strong image of place and people and time. It's Pennsylvania in late autumn, in a rural area where one has to drive "twenty-five miles just to get some milk." Toward the end, Andy sings, "I don't live there anymore/But I guess from there I'll always be." The song includes a reference to Bruce Hornsby And The Range.

John Herald was a founding member of the Greenbriar Boys, a bluegrass band. This song, though a tribute, is decidedly not a bluegrass song. No, far from it. It's a heavy and vibrant - even angry-sounding - song, with a driving rhythm on guitar.

John Herald died of an apparent suicide in 2005.

But his sense of humor still makes itself present, especially in lines like "Moonlight shimmers like a mirror ball in the gym," which is sort of a wonderful reverse simile. Ordinarily someone might describe the unnatural thing as like a natural thing - but Andy Friedman takes the beauty of moonlight and likens it to a gaudy decoration in a high school dance.

"May I Rest When Death Approaches"

"May I Rest When Death Approaches" is based on poems written by Tony Rullo, Andy Friedman's father-in-law, in the days just before his death. That fact alone makes it a song of interest. But even without knowing that, the song has a sharp power, Andy's voice full of weary wisdom. The song also benefits from some nice little touches on piano - like tears falling, or unfinished thoughts.

Check out these lyrics: "You can beat me with prayers now/Wash me with grief/Offer your fondness/But assure my release."

"Pretty Great" opens with guitar - slow and deliberate. Then the first lines: "Now I always thought I was pretty great/When I look back I can see that I ain't/I wasn't so great, I wasn't so great." There's obviously something very funny about that, and maybe it's in the fact that most of us can related. We have a vision of ourselves which we can maintain until we actually look at ourselves. A simple idea, perhaps, but this song speaks it well.

"Schroon Lake" is a spoken word piece. Nearly a minute in, Andy messes up and acknowledges it. Then there's static (and an old recording of a fiddle?) with a few words spoken over it. And it's done.

Why is this included? Andy Friedman, before performing and recording music, wrote and recited poetry, accompanied by slide projections of his drawings and paintings.

Why do songs about going home make us sad? Even in their sweetness, there is something woeful in the lyrics, in the idea. There is always a hint of death.

Here is a bit of Andy Friedman's lyrics for "Going Home (Drifter's Blessing)": "I'm going home/After I get there, my kids will be happy/I hope they don't hate me because I've been gone/I hope they might travel the road that might call/To their own happy children after I'm gone."

"Down By The Willow"
The album concludes with "Down By The Willow," a beautiful and mesmerizing tune. The lyrics begin, "She reminded me of summer/Getting close to her was hopeless." The guitar toward the end has a haunting power.

The photograph on the album's cover is by Gus Powell.

Laserbeams And Dreams is scheduled to be released April 5, 2011 through City Salvage Records. This is Andy Friedman's third studio album. His previous two are Taken Man (2006) and Weary Things (2009).
Posted by Michael Doherty at 3:22 PM