The Brian Kinler Band: "Stories From The Quarter" CD Review 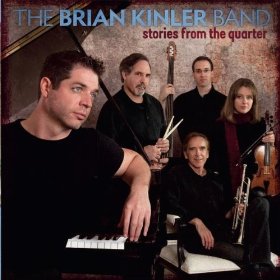 The Brian Kinler Band band's new CD, Stories From The Quarter, has that wonderful, cool New Orleans feel. And it's no wonder, as Brian Kinler grew up there, and has been playing piano since the age of three. Most of these songs were either written in New Orleans, or inspired by events and people and places there. Thus the title, Stories From The Quarter.

For those who can't get to New Orleans, this album is the next best thing. Actually, it might be better.

This album starts off with a bang. "Wookiee Boogie" is as fun as its title suggests. Turn the stereo up, dance around the room. And for those who are wondering what a "Wookiee" is, what, you haven't seen Star Wars yet?

This is a song the band usually performs at their concerts. They've also shot a music video for this song, which will be posted online soon.

The second track, "Ol' Betsy," keeps up the lively pace. The title comes from the name of the car Brian's neighbors owned when he was growing up. Listen to that great horn section. Also, Linda Moss plays harmonica on this track, and it's a great addition to the song.

"Makes Me Smile" is more reminiscent of the songs on Brian's earlier release. It's beautiful. It starts off with just Brian on the piano, and then the band comes in nice and easy for the first section of the song. This is one of the prettiest songs Brian has ever written, and it's one he wrote as a teenager, then revisited several years ago. Perry Robertson's guitar part nearly four minutes into the song is wonderful.

"Rosedown" is a gorgeous song inspired by the plantation home of that name. Andrea Gaspar's violin is so moving on this track. It might be the best song on the album.
This is a song that is also a favorite at the band's concerts. Brian usually tells the story of Rosedown before the song.

Matt Whitney's bass line on "Lay You Down" is so cool. This is a song that starts off as this cool, slow groove, and then just gets better and better. That section near the end is just incredible.

"Havana" is such a great song. This one really belongs to Jon Weiner on the drums and Dave Welch on horn. There is even a short, but totally sweet drum solo approximately three minutes in. Just a really fun song, inspired in part (and yes, Brian freely admits this) by Miami Sound Machine.

"The One Who Holds You"

"Booty Call" is just really cool and really fun. It feels like the piano itself must be smiling as this song is played.

It's hard to listen to "Easy Street" without picturing the film footage from Brian's childhood that was played on a screen at a few of his concerts during this song. But that's all right, because that's what this song is about. His mom teaching piano. The stereo being turned up. The kids dancing around the house. Family, innocence, fun and 1970s orange shag carpeting. Wonderful.

This album is really different from his previous release, "Two" (2004). This is the first album recorded with the full band. Brian's first album is also excellent, but it's certainly quieter, more introspective.

For those people in Los Angeles, the official CD release party for this album is April 24, 2010 at Vitello's in Studio City.

The Brian Kinler Band is as follows: Brian Kinler on piano, Andrea Gaspar on violin, Jon Weiner on drums, Matt Whitney on bass, and Dave Welch on trumpet and flugelhorn.

All songs on this album were written by Brian Kinler.

The following is the track list for The Brian Kinler Band's Stories From The Quarter:

(This review was originally posted on March 21, 2010 on another site that no longer exists.)
Posted by Michael Doherty at 7:10 PM