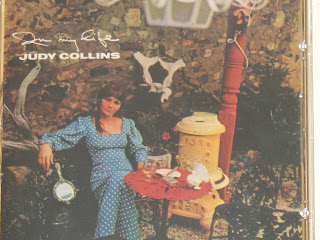 In My Life is one of Judy Collins' most interesting albums, and includes early recordings of Leonard Cohen songs as well as the incredible "Marat/Sade."

Judy Collins has one of the most beautiful and recognizable voices in folk music. Yet somehow several of her albums were allowed to go out of print, including her 1966 release, In My Life. As of this writing, new copies of that CD are being sold online for between $50 and $175. But for those who can wait a few weeks, Collectors' Choice Music is re-issuing this album, as well as eight other Judy Collins albums.

This album has a different feel from Judy Collins' earlier records, especially heard in songs like "Pirate Jenny" and "Marat/Sade." Judy really extends her range and repertoire with this album (her sixth). This is one of her best and most interesting releases.

Judy Collins starts In My Life out with "Just Like Tom Thumb's Blues," the only Bob Dylan song on the album. Her version is slower and more whimsical, particularly in the instrumentation. This song originally appeared on Bob Dylan's Highway 61 Revisited (1965).

The second track, "Hard Lovin' Loser," has a manic pace during the chorus. It has a rock, or even a jazz feel to the verses, though without any rock instruments. It was written by Dick Farina. It features some cool drums and piano work at the end.

"Pirate Jenny" was written by Bertolt Brecht, Kurt Weill and Marc Blitzstein. It was written for The Threepenny Opera. Judy Collins goes into new vocal territory here, and it's really impressive.

Leonard Cohen Songs
This album is also important as it features the first recordings of songs written by Leonard Cohen. The first of these is "Suzanne," a song that Leonard Cohen would include on his first album, released a year after Judy Collins' version. Judy Collins' version has some minor lyric changes, including, "You can spend the night forever" instead of "You can spend the night beside her." And in the third verse, she repeats lyrics from the first verse instead of singing, "She is wearing rags and feathers/From Salvation Army counters." This is a beautiful version of one of the best songs ever written.

The second Leonard Cohen song to appear on this album is "Dress Rehearsal Rag." Leonard Cohen's own version of this song wouldn't be released until 1970, on Songs Of Love And Hate. There are very minor lyrical changes in this version. Judy Collins' version features incredible piano work. It's an excellent rendition of one of Leonard Cohen's most intense songs.

"La Colombe," written by Jacques Brel and Alasdair Clayre, is a wild and angry anti-war song with beautifully dark strings. And it has these lines: "The dove has torn her wings/So no more songs of love."

"Marat/Sade" is an incredible piece of music written by Richard Peaslee for Peter Brook's production of Peter Weiss' play. Judy Collins put together different sections from the play into this amazing piece. For those unfamiliar with the music and the play, Brook's film version is available on DVD. The full title is The Persecution And Assassination Of Jean-Paul Marat As Performed By The Inmates Of The Asylum At Charenton Under the Direction Of The Marquis de Sade. The section Judy Collins chose are "Homage To Marat," "Marat We're Poor," "The People's Reaction" and "Poor Old Marat."

Randy Newman and The Beatles

Judy Collins concludes this album with the title track, a cover of The Beatles song, "In My Life." This is an excellent song, and Judy's version is wonderful.