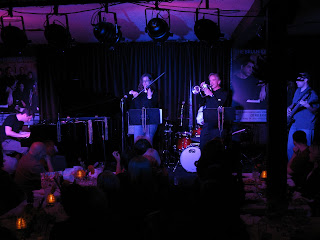 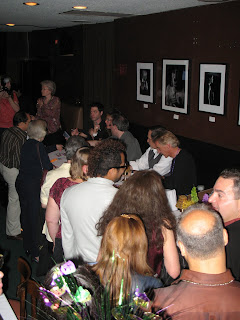 Playing to a packed house, The Brian Kinler Band celebrated the release of their new CD, "Stories From The Quarter."

The Brian Kinler Band held its CD release party at Vitello's on Saturday, April 24, 2010, playing to a packed house. This show celebrated the release of the band's new CD, "Stories From The Quarter." The concert was preceded by a slideshow, with photos of the band, and silly trivia questions. That began at 7:30 p.m. while people were still filing into the venue and ordering food and drinks.

The show started a little after 8:30 p.m., with the band choosing a fun opening number: "Wookiee Boogie" which also is the first song on the CD. The crowd was immediately into the show. For many members of the audience, this was their first time seeing the band.

The band kept up the tempo with the fun "Booty Call." Dave Welch joined them on horn toward the end of the song, walking up to the stage while he played, and they went into "When The Saint Go Marching In." Brian Kinler is from New Orleans, and so after the Saints won the Super Bowl, he's been performing this song as a nod to his hometown. (At the previous show, he actually had a Saints decal attached to the piano.)

Linda Moss joined the band on harmonica for "Ol' Betsy." She plays harmonica on that song on the CD as well. This song has a really cool interlude with brief solos by Jon Weiner on drums and Matt Whitney on bass.

Band Plays Many Of The Songs From The New CD

Brian Kinler followed that with the beautiful "Makes Me Smile," which also follows "Ol' Betsy" on the album. The band of course featured songs from the new CD, performing eight of the ten tracks from the album during the night, including the hauntingly gorgeous song "Rosedown."

From "Rosedown" the band launched into The Charlie Daniels Band's "The Devil Went Down To Georgia." Following that was "Lay You Down," which starts with a nice bass groove by Matt Whitney.

Kelly Zirbes joined the band for "Give It Up Or Let Me Go" and "Wild Women," adding her incredibly powerful and deliciously raw and sexy voice to the night. Perry Robertson also added some rock touches with his guitar, including a very cool solo during "Wild Women."

From "The One Who Holds You," they went directly into "Orange Blossom Special." This song belongs to Andrea, who is incredible on the violin. Partway through the song, Brian gets the crowd clapping, and urges them to clap faster, that Andrea will match whatever pace they set. They do, and she does.

Brian ended the set with "Slobbertongue," a fun song from his previous CD.

The encore was Stevie Ray Vaughan's "The House Is Rockin,'" with Kelly Zirbes on vocals and Perry Robertson on guitar. (Perry's solo was awesome.) This was a fun and lively tune with which to end the night, leaving everyone who attended the show in very high spirits.

After the show, all five band members signed copies of the CD for a long line of fans. While the band was signing CDs, three music videos played on the television screen. These including the video for "Wookiee Boogie," which was directed by Jose C. Alvarez, and features lots of shots of New Orleans cut with shots of the band playing at Vitello's.

The following is the set list from the concert:

The Brian Kinler Band is Brian Kinler on piano, Andrea Gaspar on violin, Jon Weiner on drums, Dave Welch on trumpet and Matt Whitney on bass. The band plays somewhat regularly at Vitello's, and has been for the past few years.

(I originally posted this review on April 26, 2010 on another site that no longer exists.)
Posted by Michael Doherty at 6:51 PM