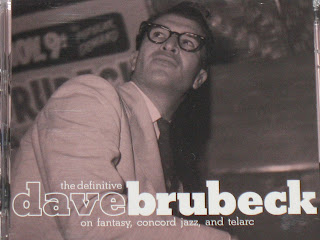 This wonderful two-disc retrospective includes both early and recent work from one of the world's best and most interesting jazz pianists.

How would one go about choosing tracks for an album titled The Definitive Dave Brubeck? That's a pretty serious task, with so much material to pick from. Brubeck has been performing and recording since the 1940s. And on December 6th, he'll be celebrating his 90th birthday.

The first disc is material from his early years, with particular emphasis on the years 1950 to 1953. This disc focuses on his interesting interpretations of others' material, and is full of shorter tracks, many of them under three minutes. Several tracks are of The Dave Brubeck Trio, including two from their first commercial recording session in 1949.

"I Found A New Baby"

The first disc opens with "I Found A New Baby," which is Dave Brubeck performing solo on piano. His style and command are already apparent on this early recording from 1942.
"I Found A New Baby" was written by Jack Palmer and Spencer Williams.

"(Back Home Again In) Indiana"

"(Back Home Again In) Indiana" starts with just piano for a minute or so. The others come in with a force and drive, and Dave's piano playing takes on a new intensity. This is The Dave Brubeck Trio, from their first commercial recording session. This song was written by Ballard MacDonald and James F. Hanley.

"That Old Black Magic" is another recording of The Dave Brubeck Trio. On this one, Cal Tjader is on bongos, giving the song more of a Latin jazz feel. This track was recorded in 1950-1951.
"That Old Black Magic" was written by Johnny Mercer and Harold Arlen, and has been covered by many artists over the years, including Glenn Miller, Frank Sinatra and Judy Garland.

"Avalon" begins as fun parlor-type music. Then about forty seconds in, the style changes. The song seems to have an urgency to it, which makes sense as the track is only just over two minutes long.

This is a song made popular by Al Jolson, who also co-wrote it with Vincent Rose and Buddy DeSylva.

"How High The Moon"

There are two versions of "How High The Moon" on the first disc. The first version is The Dave Brubeck Trio. Cal Tjader plays vibes on this version, as well as drums. It was recorded in 1950-1951.

The second version is a live recording from March 2, 1953. This version cooks and features Paul Desmond on alto saxophone. Dave Brubeck does a little "Ain't She Sweet" tease four minutes in.
"How High The Moon" was written by Morgan Lewis and Nancy Hamilton, and featured in the 1940 Broadway production Two For The Show.

"Over The Rainbow" starts with just Dave on piano. His playing is soft and sweet, a friendly voice whispering dreams. The sax doesn't come in until the end, and when it does, it's gorgeous - played by Paul Desmond. This track was recorded in Boston in October of 1952.

"Over The Rainbow" was written by Harold Arlen and E.Y. Harburg for the 1939 film The Wizard Of Oz.

"All The Things You Are"

The first disc concludes with an excellent live recording of "All The Things You Are" from December 14, 1953. There is a very brief intro on piano and then the band kicks in. Dave Brubeck's playing is just amazing on this track.

"All The Things You Are" was written by Oscar Hammerstein and Jerome Kern.

The second disc focuses mostly on Dave Brubeck's own compositions, though doesn't shy away from a few of his most famous and wonderful covers. The second disc is where most of the real magic is. The first four tracks on the second disc are live recordings.

The second disc begins with a live recording of "Koto Song" from August 8, 1982. This is a wonderful, beautiful and moving song of introspective exploration, blending classical and jazz elements. At times, it's sad and haunting, and there are sounds at the end that bring to mind some underwater magic.

"Black And Blue" conjures fantastic images of a lone figure by a lamplight long after dark, long after the rest of the world has given up the day.

And suddenly there is more life to the night still, as the horn attests to. And a few minutes in, things change and images are shattered. The song grabs hold and shakes you about. It's incredible. It's one of the best tracks on this CD. Like New Orleans on a new drug. The horn is left on its own at the end to finish the tale.

Chris Brubeck plays both the electric bass and the bass trombone on this track, switching partway through the song. "Black And Blue" was written by Fats Waller, Andy Razaf and Harry Brooks.

"St. Louis Blues" begins with piano, It sneaks up on you and has you before picking up the tempo two and a half minutes in. It has the audience too, as they suddenly clap along. But Dave silences them again quickly before then giving them what they want. - The band then joins in, and the song takes on a swinging blues feel - with a sensational rhythm, and some manic energy behind it, and on top of it, and all over it.

There is also a great bass solo by Chris Brubeck six minutes in. Then Dave Brubeck takes control, commanding the piano, the band, and all who listen. Holy moly!

"Take Five" is Dave Brubeck's most famous song, and perhaps deservedly so, even though he didn't write it. It was Paul Desmond who composed this one.

This live version is beautiful and fun - right from the start, with that familiar piano lick (which causes an eruption from the crowd). Randy Jones is incredibly impressive on drums, holding the rhythm, while being loose enough to explore. And Bill Smith is marvelous on clarinet.

Dave Brubeck is just amazing when he takes the lead - finding places of beauty and taking the listener there before leading back to the original groove.

"(Variations On) Brother, Can You Spare A Dime?"

"(Variations On) Brother, Can You Spare A Dime?" is just piano. It's sad and wonderful, and then four minutes in, it becomes more playful, whimsical, before returning to more somber tones.

"Here Comes McBride" has a cool groove, like a person sneaking around, tip-toeing in an exaggerated manner - without a worry of getting caught. This song is just great fun, with nice work on bass by Christian McBride (yes, the McBride of the song's title). It ends with a reference to "Here Comes The Bride" (also known as "Bridal Chorus").

The album concludes with some serious horn playing by Bobby Militello on "Forty Days." He plays over a nice groove, the piano sounding pretty below the excited horn. Then the bass takes the lead when the song has returned to a calmer place. And then Dave Brubeck's piano is beautiful and earnest and even intense at times. This song has an urgency that it builds to, then ends on a quieter note.

This CD is scheduled to be released November 16, 2010 through Concord Music Group.