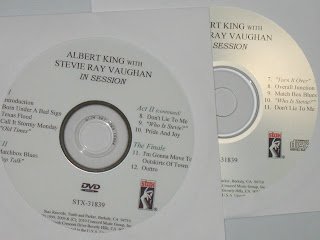 Albert King and Stevie Ray Vaughan were two amazing blues musicians, and this two-disc set is testament to their talent and to their spirit.

This session, which was recorded on December 6, 1983, was originally broadcast on Canadian television. But in the original broadcast, cuts were made to songs for time, for commercial breaks. Not so on this fantastic DVD release.

As one might guess, there is some incredible blues guitar work on this disc. But what might surprise some is the wonderful, joyful sense of fun and play these two excellent musicians display. These are two guys showing their incredible talent, and having a blast doing so.

Watching this DVD, you get a sense that each is impressed by the other, and surprised by little licks the other would do. Like they were learning from each other as they went. You can see it on their faces, and it's wonderful.

The DVD begins with "Born Under A Bad Sign," a song written by Booker T. Jones and William Bell. This song was the title track for Albert King's 1967 record release.

Right away the DVD offers a good look at the set up of the stage. Stevie Ray Vaughan and Albert King are side by side in the center. The bass player, Gus Thornton, is just off to their side. The drummer, Michael Llorens, is in a separate booth on the stage. And Tony Llorens, the keyboardist, is off to the other side. The focus is of course on Albert King and Stevie Ray Vaughn.

Albert can really sell this song, as he sings, "If it wasn't for bad luck, I wouldn't have no luck at all." And there is a nice jam with the two guitars playing well off each other. This is a great rendition of this song, and the DVD offers some nice closeups, as well as a weird shot of the tapes rolling, recording.

Albert laughs at the end of the song, saying it was a "boo-boo."

Albert gives Stevie some advice, saying, "You can't let your head get big." Stevie sings lead on "Texas Flood," a song that was the title track on his debut record, released just six months before this recording. It was written by Larry Davis.

Albert stands up halfway through the song, full of energy, verve, full of powerful blues. Stevie then stands too. While Albert takes lead, Stevie switches guitars and keeps going. This song has amazing moments in the jam, moments of pure joy. They each let notes hang and stretch. The song certainly plays the musicians at times, and those are magical moments.

Interestingly, when Albert takes the shortest of breaks while Stevie takes lead, the camera remains on Albert - as he listens. It's a great moment.

They take their seats again, as Albert says, "I'm really enjoying this." And clearly they both were. As will everyone who watches this.

"Call It Stormy Monday" begins as a slower, mellower tune. There are nice close-ups of Albert King. During the jam there are some shots of the drums, and - oddly - shots of the technicians at the board. The end of the song makes both Albert and Stevie laugh.

After "Call It Stormy Monday" they talk about when they first met, about how skinny Stevie was. Albert then pays compliment to Stevie, which is a sweet and honest moment.

Albert King's voice sounds wonderful on "Matchbox Blues." The DVD provides shots of Michael Llorens on drums, and also a strange low angle shot of Stevie as he makes his guitar do all sorts of sonic tricks. Look at the faces he makes while forcing his guitar to submit to his every wish. There are also some more great close-ups of Albert.

Albert King introduces "Don't Lie To Me" by saying, "I want you to listen to it. It's one of them old ones." He also advises Stevie, "The better you get, the harder you work."

The lyrics start, "There's two kinds of people I just can't stand/An evil-hearted woman and a blind man/Don't you lie to me." Ah yes, a perennial topic of the blues, and one which always strikes the right chord. This is a fun song, and Albert's solo is simply fantastic.

After Albert jokes with Stevie, saying, "Who the devil is Stevie Ray Vaughn?" he then says, "What is that fast thing you were doing?" Stevie replies, "This thing called 'Pride And Joy.'"

"Pride And Joy" is a song that Stevie Ray Vaughn wrote and included on his debut album, Texas Flood (1983). It was also the album's single, and reached #20 on the mainstream charts. It's a great song, and this version has some nice work on keys by Tony Llorens.

"I'm Gonna Move To The Outskirts Of Town"

Before starting the next song, Albert King says, "I'm glad I came." It's so genuine and sweet, it just disarms the viewer. Then a little way into "I'm Gonna Move To The Outskirts Of Town," he says, "I'm about to get in tune." There is a lot of great joking between Albert and Stevie as they keep the groove going.

During Stevie's first solo, Albert gets up, retrieves his pipe and lights it, then smokes it as he plays. Then during another of Stevie's solos, Albert actually files his nails. Crazy. And he doesn't miss a note. During the nice long jam, Albert stands up again. So a moment later, following his lead, Stevie stands too. Gus Thornton then stands, swinging his bass in unison with Stevie.
It's an excellent jam, and the DVD's credits roll over the end of it.

The CD contains some different tracks from the DVD, including "Ask Me No Questions," "Blues At Sunrise" and "Overall Junction."

"Ask Me No Questions" is a fun, even funky, upbeat blues tune with some great work on keyboards and bass, as well as guitar. There is even a keyboard solo, and it's just perfect. This song is a highlight of the CD.

Albert begins "Blues At Sunrise" by saying, "I know you've heard me play this so many times. This is that thing I recorded with Jimi Hendrix and Janis Joplin at the Fillmore West." He then encourages Stevie to play Jimi's guitar solo. And in the middle of the song, Albert tells the story of the Fillmore West. At just over fifteen minutes in length, this song contains a lot of great blues jamming.

"Overall Junction" is an excellent blues instrumental track written by Albert King. This version starts with some great work on organ, and of course features some incredible work on guitar. This song has a ton of energy.

The tracks in quotation marks on both the DVD and CD are stage banter between Albert King and Stevie ray Vaughan.

It's interesting that the CD contains different songs from the DVD, and that the order of the tracks is also different. An audio CD of this session was released once before, but this is the first time that the video footage is available.

This two-disc set is scheduled to be released on November 9, 2010 through Stax Records.