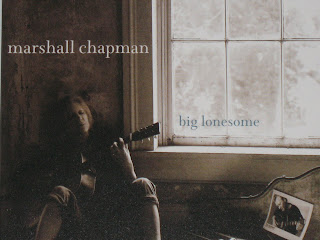 Marshall Chapman's new album, Big Lonesome, is sometimes sad, sometimes beautiful, but usually both simultaneously. It contains mostly original material (only two cover songs), and blends country and rock and even some blues.

Marshall had been planning on recording an album of duets with Tim Krekel. But Tim was diagnosed with cancer, and three months later he was dead.

This album seems Marshall's way of coping with her grief - her dreams and memories and hopes. Music has the power to help us through the worst moments in our lives, and this album is a gift from Marshall Chapman to help us all get through such times.

The album starts with the title track, "Big Lonesome," which was written by Marshall Chapman and Tim Krekel. It's a country tune about a marriage gone wrong, and features some great lyrics like, "I was making love for all the love I missed/Never dreaming it would come to this." And check out these lines: "I'm staring at the TV set alone/It don't matter if it's off or on/I jump up every time I hear the phone/But it doesn't seem to ring much since you've gone."

This song was originally planned for inclusion on the album of duets. Tim Krekel plays guitar and does vocals on this song. Tommy Spurlock plays steel guitar and dobro. Mark Winchester is on bass, and Tommy Wells is on drums.

"Down To Mexico"
"Down To Mexico" is a beautiful song - and yes, it's depressing. Marshall wrote this one while flying to Mexico six days after Tim Krekel's memorial service. In this song, she sings, "We were going to fly down there together/Just like two songbirds of a feather/Sing our songs on the mountain slope/While the lights all shimmer in the town below/For the life of me I'll never know/Why I'm standing here alone." Toward the end there is a section in Spanish.

"Going Away Party"
"Going Away Party" is one of only two covers on the album - this one written by Cindy Walker. This song has a cool, mellow groove, and features a nice horn section partway through. Marshall had been performing this song since the early 1970s, but this is her first recorded version.

"Falling Through The Trees"
"Falling Through The Trees" is an excellent and sad song about hopes and dreams destroyed. Marshall sings, "Is it real, or just something in your mind/You know it's hard to tell the difference sometimes." At one point in the song she sings, "I have dreams so big I get consumed." And then later she sings, "Lightning, thunder - why, they got nothing on the sound/Of those high hopes crashing to the ground." This is one of the best songs on the album.

"Sick Of Myself" has a nice 1950s rock feel. It features some cool work on bass by Jim Mayer and great guitar by Will Kimbrough. This is the last song that Marshall and Tim wrote together. She calls Tim out by name a couple of times in the song, as he was the person she'd like to be if she could be anybody else for a while.

Jason Krekel, Tim's son, does what would have been his father's vocal part. And at the end there's a bit of conversation between Marshall and Jason about Tim.

"Tim Revisited"
"Tim Revisited" is obviously a song about Tim Krekel. There is no metaphor here, no hidden meaning - it's all right there, direct, in the lyrics. Marshall sang it to Tim over the phone three days before he died.

"I Can't Stop Thinking About You"

"I Can't Stop Thinking About You" was written about Tim a month after he died. About happy memories, Marshall sings, "I'm told one day they'll comfort me." What a wonderful and heartbreaking line. She ends the song with, "I'm doing all I can to live and carry on/I can't stop thinking about you."

"I'm So Lonesome I Could Cry" is the second and final cover on this album - this one, of course, written by Hank Williams. Marshall does a gorgeous and heartfelt rendition of the song. Try to hold back the tears as she sings, "I've never seen a night so long/When time goes crawling by." The guitar in this song is so clear and sad, and there are some very pretty backing vocals by Bonnie Bishop and Lisa Oliver-Gray.

"Riding With Willie" is about riding on Willie Nelson's tour bus. It has some nice horn parts, and the lines, "I couldn't really tell you what state I'm in/That's the way I like it."

The album concludes with a live track from the last concert Marshall Chapman ever performed with Tim Krekel. The song, "I Love Everybody," was co-written by Tim Krekel. It was recorded May 30, 2009 at The Vernon in Louisville, Kentucky. The song really kicks into higher gear about three and a half minutes in - it becomes a real rocking number.

Michael Murphy is on sax, and Donn Adams plays trombone on this track. John Mann is on guitar, Mike Williams is on bass, and Mike Alger is on drums.

This track is nearly ten minutes long. After the song, Marshall talks to the audience about "I'm Sick Of Myself," and she reads some of the lyrics.


The musicians on this album are Marshall Chapman on lead vocals and rhythm guitar, Will Kimbrough on lead guitar, Casey Wood on drums and percussion, Jim Mayer on bass, Michael Utley on organ, Jim Hoke on steel guitar and sax, and Steve Herrman on trumpet. (That lineup is for every song except "Big Lonesome" and "I Love Everybody," which were recorded at other times.)

Marshall Chapman's new album, Big Lonesome, is schedule to be released October 26, 2010. This is her sixth release on TallGirl Records, and her twelfth release overall.

Marshall Chapman has also landed her first film role, playing Gwyneth Paltrow's character's road manager in Country Strong, which is due out in late December of this year.