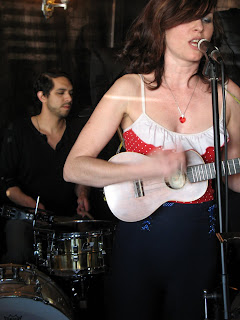 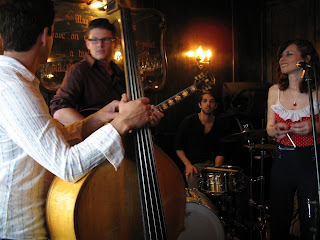 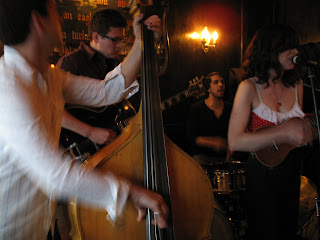 SET II
1. Missing You Madly
2. Speedway
3. Only Up From Here
4. Flashback
5. Where Eagles Dare
6. Triangle
7. The Road Is My Middle Name
8. Bedford Stuyvesant

("Vampira" is a Misfits song)
(In the first set, Matt Kolher joined her on electric guitar for "There's A Party Going On," and stayed for the rest of the set.)
(Matt did the lead vocals on "Mystery Train" - Holland sat that one out)
(Josh Lopez did a set between Holland's two sets, and Holland sang backing vocals for his entire set)
(During the second set, Danny, from the audience, played fiddle on all but the first two tunes)
(Holland played triangle on "Triangle")
(In the second set, Matt Kolher joined her on electric guitar for "Triangle," "The Road Is My Middle Name" and "Bedford Stuyvesant")
(There was no encore)
(The show started around 3 p.m.)

Holland Greco will be playing next Sunday and the following Sunday at the Thirsty Crow.
Posted by Michael Doherty at 5:02 PM