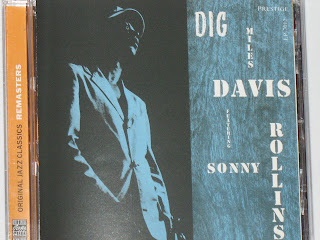 Concord Music Group has re-issued the classic Miles Davis album, Dig, featuring two bonus tracks. This is part of the Original Jazz Classics Remasters series, and it sounds amazing.
These recordings were made when jazz records were finally allowed to spread out into a long format. No rushing through the songs, no clipped solos. On these recordings the musicians were able to show their talent, their passion. It's there, in every glorious note.

The energy and stamina these guys had is amazing. After all, this entire album (including the two bonus tracks) was recorded all in one day - October 5, 1951. Miles Davis wrote most of the material for this album.

The album's title track, "Dig," starts right off as if we're arriving in the middle of a great party. It takes no time to get in the swing of it. No easing in. This is a fast-paced jazz gem, with Art Blakey keeping things up with his great work on drums. Sonny Rollins, Miles Davis and Jackie McLean all take solos.

"It's Only A Paper Moon"

"It's Only A Paper Moon" is the only cover (of the original five tracks, that is). It was written by Harold Arlen, Billy Rose and E.Y. Harburg. Nat "King" Cole recorded a version in the 1940s, and it's also been covered by Ella Fitzgerald.

This version by Miles Davis has excellent energy. It's got a great swinging rhythm with Tommy Potter on bass. Miles Davis is bright and playful on his lead part.

Jackie McLean did not play on this track.

"Denial" is another fast-paced tune, with Miles on fire right out of the gate. Just wonderful. A few minutes into the song, Art Blakey lets loose on the snare drum, and with each turn goes a little wilder, a little louder, using more of the kit. This song seems to end a bit too soon.

Walter Bishop gets to start "Bluing," playing over the nice bass line by Tommy Potter. It's nearly a minute before the horns come in at all.

This song has a slower, swinging rhythm, which is very cool. It's a wonderful beat that allows plenty of room for Miles and Sonny and Jackie to play. And play they do. This track is nearly ten minutes long. Ten minutes of jazz bliss, with warm solos. It does have, however, an uncertain ending.

"Out Of The Blue"

"Out Of The Blue" has a quicker swing tempo. Miles Davis takes the first solo, and Sonny picks up right where Miles left off. What a flow there is to this tune. Everything comes together beautifully toward the end. And this song has a wonderful bass line. This is the track that concluded the original record.

The two bonus tracks on this release are from the same session, October 5, 1951. Both songs are covers.

The first is "My Old Flame," a song written by Sam Coslow and Arthur Johnston. It starts with just piano, but the horn and bass come in soon. Miles' work is beautiful and tender. Find a partner, turn the lights down low, and play this track.

The second bonus track is "Conception," written by George Shearing. It begins with a frantic energy, especially coming out of that last track. The horns relax for a bit a few minutes in, to let Walter Bishop and Tommy Potter come to the fore.

The musicians on this CD are Miles Davis on trumpet, Sonny Rollins on tenor saxophone, Jackie McLean on alto saxophone, Walter Bishop on piano, Tommy Potter on bass, and Art Blakey on drums.

This re-issue was released by Concord Music Group on September 28, 2010. Four other titles from this series were also released on that date, including Vince Guaraldi Trio: Jazz Impressions of Black Orpheus, Wes Montgomery: Boss Guitar, Chet Baker: It Could Happen to You and Bill Evans Trio: Waltz for Debby.