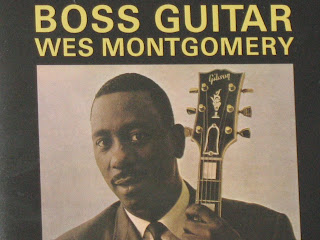 Wes Montgomery was an amazing jazz guitarist, and on the 1963 album Boss Guitar he showed his skill and joy on every track. He was a total master of his instrument, and as such made the notes come fast and seemingly effortlessly.

Accompanying him on this release are Mel Rhyne on the Hammond B-3 organ and Jimmy Cobb on drums. Cobb had also played drums with Miles Davis on such seminal and important recordings as Kind Of Blue (1959) and Sketches Of Spain (1960).

The album opens with "Besame Mucho." A quick shuffling rhythm with brushes on the snare by Jimmy Cobb and light touches on the organ by Mel Rhyne give Wes Montgomery both the foundation and the space for him to build and discover. The guitar runs playfully over the rhythm in a delightful manner - in bright and joyful tones. Wes makes it sound so easy, so effortless, so natural - like a person telling a familiar story, a story he delights in the telling. Five minutes in, the Mel Rhyne on organ takes a turn at lead.

"Besame Mucho" was written by Consuelo Velasquez. It's been covered by numerous artists over the years, including The Beatles.

"Dearly Beloved" is a fast-paced tune with Mel on the organ getting the focus first. But then Wes comes in and just plays the heck out of the song. Jimmy Cobb gets some great licks in on drums too - even with a short solo section. "Dearly Beloved" was written by Jerome Kern and Johnny Mercer.

"Days Of Wine And Roses"

"Days Of Wine And Roses" is a mellow, slower song with a late-night feel. This song shows Wes Montgomery's versatility as a player, because he plays this song in a manner that is different from the two previous tracks. He tailors his playing to fit the material.

"Days Of Wine And Roses" was written by Henry Mancini and Johnny Mercer. It was featured in the 1962 film of the same name, and Mancini and Mercer received the Academy Award for Best Original Song.

"The Trick Bag" has a free-flowing feel, with each of the three musicians contributing some great stuff. Jimmy Cobb creates a great rhythm on drums. Plus there is an incredible section where the keyboard keeps the rhythm and the drums then take basically a lead part. And then the guitar comes in, takes over -- and it's all finished too soon.

Wes Montgomery wrote this one, and it is definitely one of the best tracks on this album.

"Canadian Sunset" is all about the guitar. Jimmy just keeps time with a very simple rhythm. Mel keeps it simple on organ as well - until three and a half minutes in, when he takes a turn at lead.
"Canadian Sunset" was written by Eddie Heywood and Norman Gimbel.

"Fried Pies" is a cool song with a great groove and some nice work on organ. There are quiet sparse sections in this song that sneak up on the listener, and are just wonderful - the song ends on one of them. Jimmy Cobb's drumming on this track is heavy on the cymbals.

"Fried Pies" was written by Wes Montgomery. It's the second of his two original compositions for this album.

"The Breeze And I"

"The Beeze And I" is an intricate and wonderful song - with different layers - one popping out at the listener, then another. This song features some phenomenal work on guitar by Wes Montgomery, and an interesting rhythm by Jimmy Cobb. "The Breeze And I" was written by Ernesto Lecuona and Al Stillman.

The original recording concluded with "For Heaven's Sake," a very slow and mellow tune written by Donald Meyer, Elise Bretton and Sherman Edwards. This is a song to calm the nerves - a sort of lullabye for adults, a tune that makes you feel everything will be all right, or maybe is all right.

This special re-issue of Boss Guitar features three bonus tracks. These are alternate takes of three of the album's best songs (including the two originals): "Besame Mucho," "The Trick Bag" and "Fried Pies."


The musicians on this CD are Wes Montgomery on guitar, Mel Rhyne on Hammond B-3 organ, and Jimmy Cobb on drums.

This CD was released on September 28, 2010 through Concord Music Group. Four other titles from this series were also released on that date, including Miles Davis Featuring Sonny Rollins: Dig, Vince Guaraldi Trio: Jazz Impressions Of Black Orpheus, Chet Baker: Sings - It Could Happen To You and Bill Evans Trio: Waltz For Debby.

Wes Montgomery died in 1968 at the age of 43 (coincidentally the same age as Django Reinhardt, to whose guitar-playing his was often compared).

(This review was originally posted October 29, 2010 on another site that's just not as cool as this one.)
Posted by Michael Doherty at 7:17 PM